SEOUL, June 1 (Yonhap) -- The chief of the U.S. delegation to summit preparation talks with North Korea said Friday the discussion is "moving in the right direction."

Sung Kim, U.S. ambassador to the Philippines, however, noted that there is still "much work" left before nailing down the summit between U.S. President Donald Trump and North Korean leader Kim Jong-un, expected to be held on June 12 in Singapore.

Kim made the remarks during his visit with South Korean Foreign Minister Kang Kyung-wha. His delegation held talks with the North's team, led by Pyongyang's Vice Foreign Minister, Choe Son-hui, in the border truce village of Panmujom, on Sunday and Wednesday.

"As both President Trump and Secretary (of State) Pompeo indicated, there’s much work left before the proposed summit," Kim said.

"We believe that we're moving in the right direction to the ongoing series of consultations, including Secretary Pompeo’s engagement with Vice Chairman Kim Yong-chol ... our discussions at Panmunjom and of course the discussions in Singapore as well," he added.

Over the last week, Washington and Pyongyang have held a series of talks to prepare for the summit, including in Singapore and New York.

Kim called the current juncture of brisk diplomacy a "very important moment" on the peninsula.

"The recent developments between the two Koreas and the proposed summit between President Trump and Chairman Kim, of course, offer a historic opportunity to achieve lasting peace and complete denuclearization," he said.

"I think absolutely we’re on the same page," she said. 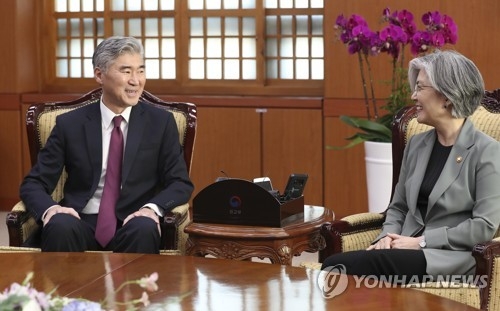