The 29-year-old midfielder reached the century mark in caps by starting the friendly against Bosnia and Herzegovina at Jeonju World Cup Stadium in Jeonju, 240 kilometers south of Seoul. This was his 95th international start. 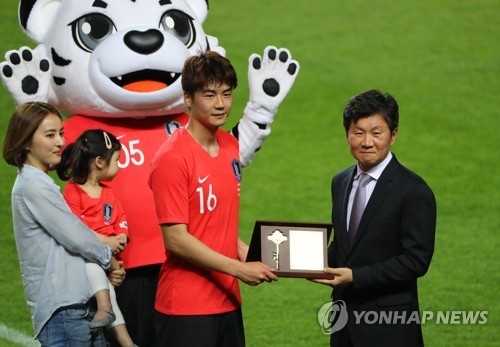 At halftime, the Korea Football Association (KFA) celebrated the occasion by presenting Ki with a gold key engraved with the number 100.

"I'd like to thank all the fans for their support," Ki told the crowd. "We'll try to play as one at the World Cup (next month in Russia) and leave our fans with good memories."

The Swansea City veteran missed South Korea's previous match against Honduras on Monday with back issues.

Ki, who made his international debut in September 2008 as a 19-year-old, became the 10th South Korean in the Century Club by FIFA's count. Cha Bum-kun and Hong Myung-bo are tied atop the list with 136 caps.

But on the KFA's separate list, Ki is the 14th member of the exclusive club. The KFA counted appearances in the regional Olympic qualifiers in the 1970s and the 1980s because Asian nations sent their senior teams -- instead of under-23 teams as is the case today -- to those competitions. Taking such matches into account, four additional players -- Kim Ho-gon, Cho Young-jeung, Park Sung-hwa and Huh Jung-moo -- are in the KFA's Century Club.

Ki has represented South Korea at the 2010 and 2014 FIFA World Cups, and is a sure bet to make South Korea's 23-man roster for this year's World Cup in Russia, which will be finalized on Saturday. 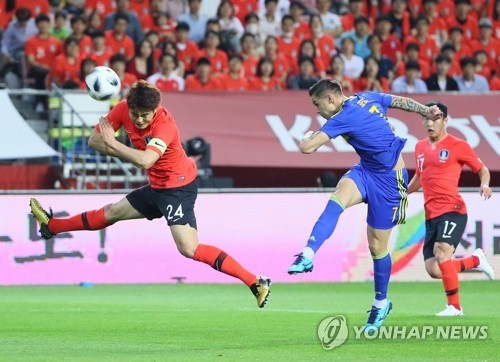