JEONJU, South Korea, June 1 (Yonhap) -- Familiar faces returned to South Korea's starting lineup against Bosnia and Herzegovina (BiH) on Friday, with their team captain playing at the back.

The starting list for the friendly between South Korea and BiH at Jeonju World Cup Stadium in Jeonju, North Jeolla Province, showed Ki Sung-yueng, Lee Jae-sung and Koo Ja-cheol back in their international duty after missing a World Cup tune-up against Honduras in Daegu on Monday.

Ki, who played for Swansea City in the English Premier League this past season, will wear the captain's armband in his 100th international appearance. The 29-year-old didn't play in South Korea's 2-0 win over Honduras due to lower back pain.

Ki usually starts in the midfield, but this time, he'll be one of the three defenders in South Korea's 3-5-2 formation. But he is likely to serve as a deep-lying playmaker, distributing the ball from the back and moving forward to help South Korea's build-up.

Playing next to Ki will be two center backs who have little international experience. Oh Ban-suk, who made his international debut against Honduras, and Yun Young-sun, who will have his fifth international match, will complete the three-man defense in front of goalkeeper Kim Seung-gyu.

Kim Min-woo and Lee Yong will start in the wing back positions and are expected to provide some pace down the flanks.

Lee Jae-sung, the reigning K League 1 MVP, also returned to the starting 11 as an attacking midfielder after skipping the Honduras friendly to recover from fatigue. The Jeonbuk Hyundai Motors talisman will make his 33th cap.

Koo, in his 67th appearance, will start in the center midfield with Jung Woo-young, supporting Lee from behind. Koo, who plays for FC Augsburg, also sat out the match against Honduras.

BiH's starting lineup included their captain and all-time leading scorer Edin Dzeko. The AS Roma target man will play as the lone striker for the visitors. 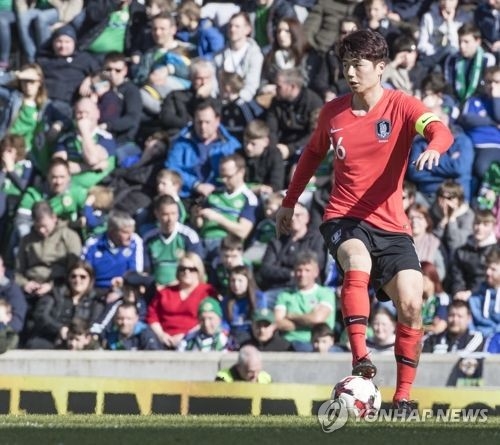