INCHEON, June 1 (Yonhap) -- Police sought court warrants on Friday for the arrests of two professional baseball players who are accused of sexually assaulting a drunk woman, with both of them denying the charges.

The arrest warrants were filed for Cho Sang-woo, a reliever for the Nexen Heroes, and Park Dong-won, a catcher for the same Korea Baseball Organization (KBO) team, according to the Incheon Namdong Police Station in Incheon, 40 kilometers west of Seoul.

The two are facing a "quasi-rape charge" for sexually assaulting an intoxicated woman at a team hotel in Incheon on May 23 while the Heroes were in town for a road series against the SK Wyverns.

Both of them underwent police interrogation on Monday after the woman's female friend reported the allegations to the police.

The two are denying the charge, with Cho telling the interrogation on Monday that "there was in fact sexual intercourse, but it was consensual and there was no rape."

Park dismissed the charge altogether, saying that "I returned to (my) room first after drinking together."

The prosecution plans to review the police application for arrest warrants before deciding whether to file for the warrants with a local court early next week.

"As the suspects are public figures, and this case is drawing huge social attention, (the prosecution) plans to deeply review whether to apply for arrest warrants over the weekend," a prosecution official said.

The KBO has suspended both players from all baseball-related activities and has said it will determine a further course of action upon completion of the police investigation. The Heroes also took the two players off their active roster.

Police said earlier they have collected evidence from the hotel room where the alleged sexual assault took place and the National Forensic Service is currently analyzing it. Police have also been studying closed-circuit television footage from the hotel. 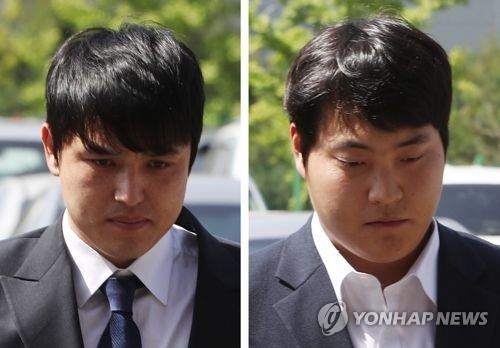