Edin Visca scored a hat trick for the 41st-ranked Bosnia against world No. 61 South Korea, who got their lone goal from midfielder Lee Jae-sung in the first half.

For the second straight World Cup, South Korea dropped their final tune-up contest at home. Four years ago, South Korea lost to Tunisia 1-0 in Seoul before the World Cup in Brazil, and went on to suffer an early group stage exit with a draw and two losses.

In Russia later this month, South Korea will face Sweden, Mexico and Germany in Group F. 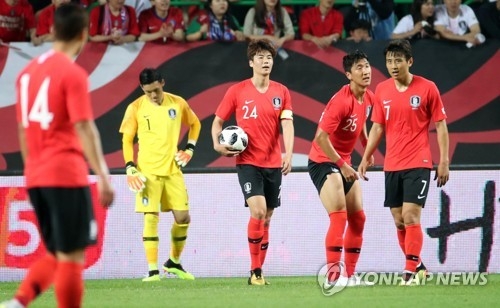 South Korea started the same attacking duo as the previous match against Honduras on Monday, with Son Heung-min joined by Hwang Hee-chan. And that was about the only holdover from Monday, as head coach Shin Tae-yong shifted from a 4-4-2 formation to a 3-5-2 system.

Other than Son and Hwang, only Jung got the second straight start.

After the teams traded a handful of chances early in the game, the visitors opened the scoring in the 28th minute with Visca's first goal.

Eldar Civic's cross from the left flank for striker Edin Dzeko missed the intended target, but with the AS Roma star double teamed in the box, Visca was left all alone to fire home the loose ball past goalkeeper Kim Seung-gyu.

Lee responded for South Korea just two minutes later. Hwang Hee-chan took a long pass from midfield and flicked it toward the charging Lee, who dragged goalkeeper Ibrahim Sehic out of the net before chipping it over him to level the score.

South Korea appeared poised to take the 1-1 score into the second half, but Visca struck again after catching the defense napping. Only moments before the break, Haris Duljevic delivered a lengthy cross to Visca for a one-on-one chance, and the midfielder again beat Kim with relatively ease.

The late goal took the wind out of South Korea's sails, as the hosts' efforts for a second-half equalizer fell flat.

Visca completed his hat trick in the 79th with a one-timer off another long cross from left.

Lee Seung-woo and Moon Seon-min, two offensive heroes in a 2-0 win over Honduras on Monday, came off the bench after Visca made it 3-1 for Bosnia-Herzegovina, but failed to bring South Korea out of the hole.

Now comes decision time for coach Shin, who has to drop three players by Saturday. One likely candidate to miss the World Cup is fullback Kim Jin-su, who missed both tune-up matches this week while recovering from knee injury.

Kim was also dropped from the 2014 World Cup squad at the last minute with an injury.

Shin selected six center backs for his provisional roster, and at least one of those six could fall victim to the number crunching.

Lee Chung-yong, a veteran midfielder whose inclusion raised a few eyebrows, may also be dropped. He has been playing sparingly for his Premier League club, Crystal Palace, in recent years, and he wasn't deemed fit enough to play in the World Cup.

Shin was still willing to give Lee a shot and defended his selection by saying he needed some veteran leadership. Lee started the first tune-up match against Honduras but left with an injury before making any impact. He missed Friday's match. 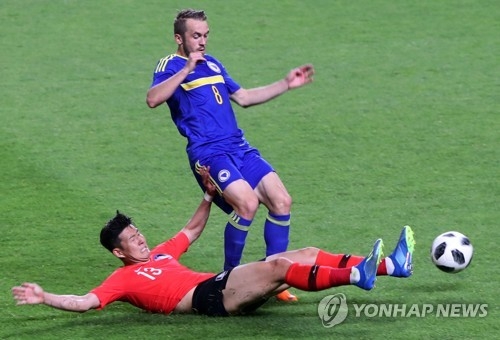