JEONJU, South Korea, June 1 (Yonhap) -- South Korea used a back three system with their usual midfielder on defense in a friendly against Bosnia and Herzegovina (BiH) on Friday, but their experiment failed miserably, with the team having trouble covering space all night.

South Korea lost to BiH 3-1 at Jeonju World Cup Stadium in Jeonju, North Jeolla Province, some 240 kilometers south of Seoul, after surrendering three goals to Edin Visca. This match was South Korea's last World Cup warm-up at home before they fly to their pre-World Cup training camp in Austria with final roster of 23 players on Sunday.

South Korea are with Sweden, Mexico and Germany in Group F at the 2018 FIFA World Cup in Russia. 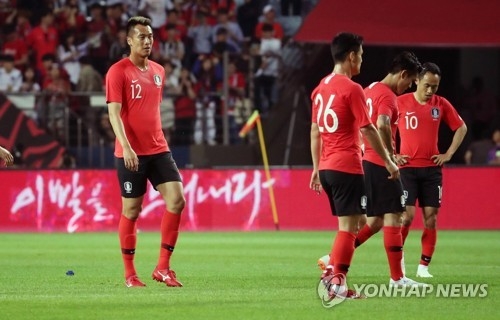 South Korean head coach Shin Tae-yong previously said the BiH friendly would be a good test for them to check their game plan against Sweden, South Korea's first Group F opponents at the World Cup on June 18 in Nizhny Novgorod.

Against BiH, South Korea started with a 3-5-2 formation that brought some familiar faces back into action. South Korea made eight changes from their starting 11 against Honduras on Monday, when they lined up in a 4-4-2 formation. Returning to South Korea's 11 were team captain Ki Sung-yueng and midfielders Lee Jae-sung and Koo Ja-cheol.

And there was a twist.

Instead of forming their three-man defense with traditional center backs, Shin deployed Ki, who was making his 100th international appearance, in the back, hoping he can serve as a deep-lying playmaker next to center defenders with his ball distributing skills.

Such a role is not completely new to Ki, who previously played in the back with Welsh club Swansea City as well as the national team.

Ki also had to control the defensive line, with two less-experienced center backs playing next to him. Oh Ban-suk was playing only his second match for South Korea, while Yun Young-sun was in his fifth international match.

BiH took early control of the match with Juventus playmaker Miralem Pjanic and Middlesbrough man Muhamed Besic's controlling the midfield. With AS Roma striker Edin Dzeko playing as the lone striker, the visitors consistently attacked space behind South Korea's back three and wing backs with through balls.

And Robert Prosinecki's side capitalized on that point and produced an opening goal in the 27th minute. Left back Eldar Civic received a through ball behind South Korean right back Lee Yong and delivered a long cross into the box. Visca then fired an uncontested right-footed strike to make it 1-0 for BiH.

South Korea went for counter attacks when they won the ball. They also sent lots of diagonal passes to overlapping wing backs -- mostly to right back Lee Yong -- so that they could deliver crosses into the box.

Making their second straight start together, South Korea's two forwards, Son Heung-min and Hwang Hee-chan, tried to penetrate space behind the opponent's back four with daunting runs and moved forward with their quick dribble. Attacking midfielder Lee Jae-sung played behind the two, and he also ran down to space when Son and Hwang won the ball. 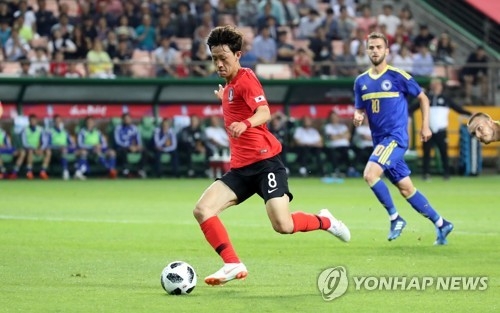 And Son used his individual skills to cause havoc on BiH's defense. After receiving a lofted-through ball, Son dribbled past two BiH defenders, and fired a left footed strike in the 27th, but was stopped by BiH goalkeeper Ibrahim Sehic.

South Korea's equalizer came from Lee in the 30th. After a South Korean interception of a pass from the midfield, Hwang received the ball and fed Lee, who was running toward the box. The reigning K League 1 MVP then finished nicely with his left foot.

However, South Korea were punished again after they also failed to cover space behind wing backs. Visca made a diagonal run and received fine through ball from Besic. The Istanbul Basaksehir midfielder then collected his second goal of the night with his right foot.

South Korea replaced center back Oh for another defender, Kwon Kyung-won, to start the second half. Kwon was one the players who didn't play against Honduras on Monday.

BiH took out their two key players in the second half. Pjanic was replaced by Elvis Sari in the 57th, while Dzeko was substituted in the 60th for Riad Bajic.

Both teams had little action in the early second half as they appeared to be out of gas. They tried to produce chances from set pieces, but the South Koreans appeared to have a tough battle in the air against the tall and strong Bosnians.

South Korea conceded the third goal to Visca in the 79th after their defenders again failed to block the opponents' penetrating attacker. The visitors made a quick counterattack starting from the left flank. Bajic found Visca running toward the box and the 28-year-old completed a hat-trick with his right foot.

South Korea switched their formation to 3-4-3, when two new faces -- Lee Seung-woo and Moon Seon-min -- came on to the pitch in the 81st and played as wing forwards.

The hosts then made another tactical change in the 87th, taking out Ki for towering striker Kim Shin-wook. Suddenly, South Korea were playing a 4-4-2 formation, with Son moving to the left flank. Hellas Verona attacker Lee Seung-woo teamed up with Kim to play up front.

With their familiar settings, South Koreans pushed forward, and tried to send crosses targeting Kim's head. They ultimately failed to score goals, and they only ended up discovering their problems with the back three.