JEONJU, South Korea, June 1 (Yonhap) -- Tottenham Hotspur forward Son Heung-min showed why he is the attacking ace for South Korea, but failed to save his side from defeat in their last home friendly ahead of the 2018 FIFA World Cup on Friday.

Son started at forward in South Korea's 3-1 loss against Bosnia and Herzegovina (BiH) at Jeonju World Cup Stadium in Jeonju, North Jeolla Province. This match was South Korea's last friendly at home before they travel to Austria for their pre-World Cup training camp with 23 players. South Korea will cut three players from their preliminary squad and unveil their final 23-man list on Saturday.

Despite the formation change, there were no big changes in Son's role, which was leading his side's attack with his skills.

Son first showed his power with his dribble. He drew a yellow card from BiH's Toni Sunjic in the 17th and earned free kick just outside box, after moving the ball with pace.

In the 27th, the 25-year-old produced huge noise from home fans with his sleek movement. He received a lofted-through ball from right back Lee Yong, dribbled past two defenders in the box, and fired a left-footed strike from close range. His effort, however, was denied by BiH goalkeeper Ibrahim Sehic.

In the second half, Son kept bothering BiH defenders with his aggressive moves. In the 58th, he drew another yellow card from BiH. While making a turn to win the ball, Son was brought down by Elvis Sari, who replaced Miralem Pjanic in the 57th.

For Son, what made him be more aggressive on the pitch was probably the score. South Korea never led in the match. They were down to 2-1 after the first half, and conceded another goal in the second half. Edin Visca scored all three goals for the visitors.

Son also appeared to be running out of gas in the later second half as he didn't produce much of a threat.

Son, however, produced another moment that showed his talent in the second half stoppage time. With four minutes added after regulation, Son took the ball from the center circle, dribbled toward the box and fired a left-footed strike. However, his last minute effort failed to hit the target, making him to leave the match without a goal.

This was Son's 66th international appearance. He has so far netted 21 goals for South Korea. 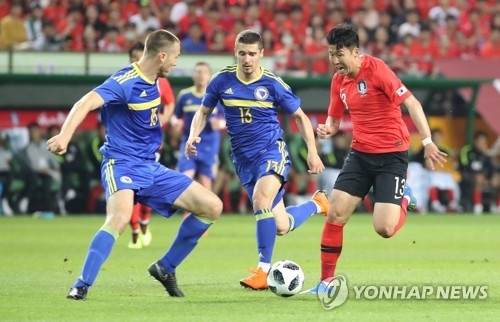 Son Heung-min shows his attacking power in loss to Bosnia

Son Heung-min shows his attacking power in loss to Bosnia