JEONJU, South Korea, June 1 (Yonhap) -- More than 41,000 fans sent off their national men's football team to the FIFA World Cup in Russia in an anti-climactic ceremony on Friday, the mood dampened by South Korea's 3-1 loss to Bosnia and Herzegovina earlier in the evening.

Bosnians defeated the Taeguk Warriors behind Edin Visca's hat trick to spoil the ceremony for the World Cup-bound home team at Jeonju World Cup Stadium in Jeonju, some 240 kilometers south of Seoul. 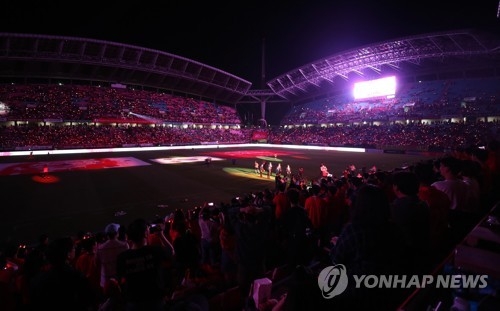 South Korea will play in their ninth consecutive World Cup, and this was their final match at home before the big tournament.

They will set up camp in Austria and play two more matches there before hopping over to Saint Petersburg, their base during the World Cup. South Korea will face Sweden, Mexico and Germany in Group F.

"The biggest source of energy for these players is your love and support," Huh told the audience. "I hope you can cheer them on so they can play with confidence."

Current bench boss, Shin Tae-yong, apologized to the fans for the loss, but vowed things will be different in Russia.

"We all know exactly what you want from us," Shin said. "We'll go out there and do the best we can. And to do that, we need your support."

"We'll regroup and make sure we won't play another match like this at the World Cup," the subdued player said. "We want to play the kind of football that makes a lasting impression on our fans."

The players and coaches circled the stadium hoisting the national flag, and tossed balls into the stands to wrap up the ceremony.