Visca was the hero of the night for BiH as he scored a hat trick in the visitors' 3-1 win over South Korea in a friendly match at Jeonju World Cup Stadium in Jeonju, North Jeolla Province. The 28-year-old, who started as a right winger, said he was happy with his performance.

"I'm happy because of goals," said Visca, who plays for Istanbul Basaksehir in Turkey, after the match. "They have some problems in defense and we used that."

South Korea used a 3-5-2 formation, but they failed to properly cover their space behind wing backs and center backs. Robert Prosinecki's side consistently played through balls behind South Korea's defense line and stunned the South Koreans, who gathered to watch their national team's last friendly at home before leaving the country for the 2018 FIFA World Cup. 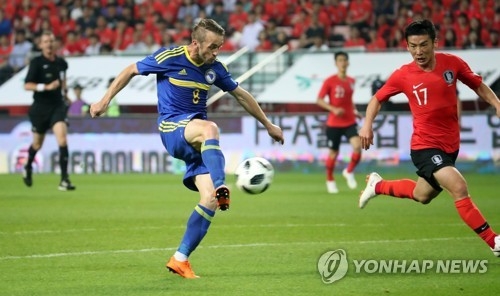 "It was a tough game," he said. "First half, we made some mistakes and give them some chances, but generally we played good because we scored three goals."

"We saw his quality today," he said. "I wish him a luck at the World Cup."

Visca collected his first goal in the 27th minute, following a fine cross by left back Eldar Civic. South Korea leveled the score 1-1 with Lee Jae-sung's goal two minutes later, but Visca got the lead back for BiH with his goal in the 45th. He received a lofted-through ball from Haris Duljevic and found the back of the net with his right foot.

Visca then completed the hat trick in the 79th with another right-footed strike that sealed the victory for BiH.

Visca said he wished South Korea the best at the World Cup, where the Taeguk Warriors will face Sweden, Mexico and Germany.

"I hope they finish second (in the group)," he said. "I wish Korea good luck."