Shin started the match with a 3-5-2 formation, lining up three defenders on the back in a departure from a 4-4-2 system from Monday's match against Honduras. Ki Sung-yueng, normally a central midfielder, anchored the new-look defense in his 100th international match. He was flanked by two inexperienced backs, Oh Ban-suk and Yun Young-sun, with just five caps combined prior to Friday. 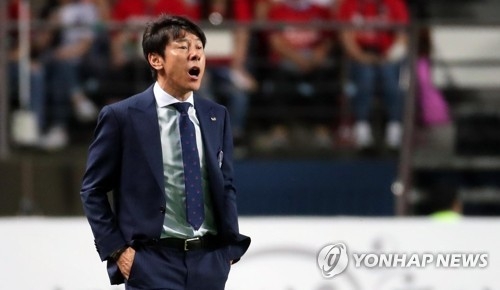 While Ki held his own, Oh and Yun were badly exposed on the flanks. All three Bosnian goals -- all scored by Edin Visca -- came off crosses from either wing.

Shin blamed those mishaps on the young defenders' old habits. For Shin's back three system to work, he needed Oh and Yun, both natural center backs, to play more like full backs and cover the flanks. They failed to deliver.

"When practicing in a back three setting, we tried to get two defenders on the left and right to play as if they were full backs," Shin said. "But they kept drifting toward the middle, maybe subconsciously, because they were just used to playing as center backs (in 4-4-2). We gave away so much space to the opponents."

On Bosnia's second goal in the first-half stoppage time, South Korean defenders were reduced to spectators as Haris Duljevic sent a long, diagonal cross from left to Visca, who went in alone on goalkeeper Kim Seung-gyu.

Visca's third goal, which came in the 79th, was almost a carbon copy of the second marker, with a long cross finding the midfielder for an uncontested shot.

Shin switched to 4-4-2 late in the second half. The coach has been tinkering with his formation and said he wanted to test different defenders in different formations before setting his final, 23-man roster on Saturday.

"At the World Cup, we'll be up against much tougher opponents, and we wanted to try both the back three and back four systems," Shin said. "I wanted to give every defender a chance to play so I could select my final roster fairly, but that came at the cost of defensive cohesion." 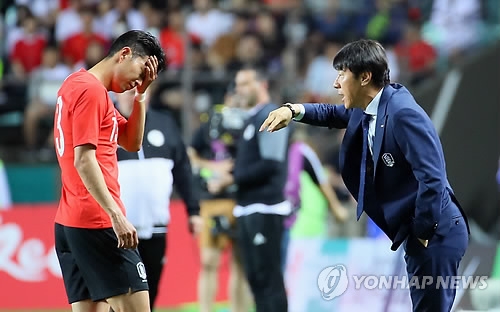 Shin saw this match as a test for South Korea's first World Cup contest against Sweden on June 18. South Korea, at No. 61 in FIFA rankings, will be the heavy underdog against the 23rd-ranked Sweden.

The coach said he has done plenty of scouting on Sweden, and he decided not to reveal too much of what his team had prepared in Friday's match.

"I can't really go into details, but we didn't even get to show what we'd worked on in our set-pieces," Shin said. "I felt that we had to keep things close to the vest. But we should have done that while not giving up so many goals."

Shin said he still took away a few positives from the loss, adding that he thought the match wasn't as lopsided as the score indicated.

"I liked the way we pushed back with quick counter attacks from midfield," he said. "We missed a few chances right at the goalmouth. If we can polish that aspect of our game, I think we can make life difficult for Sweden."