Kim was not available for South Korea's 3-1 loss to Bosnia and Herzegovina on Friday at Jeonju World Cup Stadium in Jeonju, 240 kilometers south of Seoul. The 25-year-old full back also missed Monday's match against Honduras while nursing a knee injury. 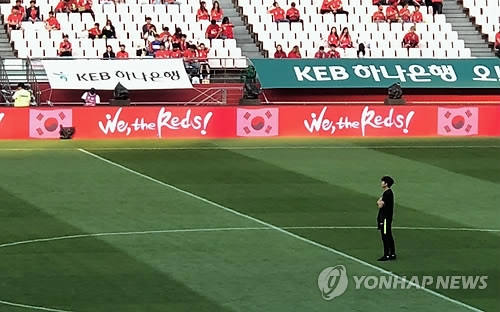 When head coach Shin Tae-yong whittles down his 26-man provisional roster to 23-man final squad Saturday, Kim is expected to be one of the three cuts.

The highly-skilled player would have been Shin's first-choice full back, if not for the injury suffered in a friendly against Northern Ireland. Kim's recovery has been slow, but Shin still held out hope that Kim would be healthy in time for the World Cup, naming him as one of 12 defenders on the provisional team on May 14.

But Kim couldn't get healthy enough to play, and his absence even from the substitution list spelled doom.

The star-crossed player also missed the 2014 World Cup in Brazil with an injury. He was put on the final roster at the time, but a right ankle injury forced him off the team just weeks before the tournament.

Kim cut a forlorn figure when he stood alone on the middle of the field before Friday's match, looking toward the stands, apparently lost in deep thought. After the match, Kim said he was resigned to his fate.

"I haven't heard from the coach yet, but I know exactly how my body feels," he said. "I don't think I can go (to the World Cup). I know it's up to the coach to make the call, but I don't think I am healthy enough."

He said having already experienced a last-minute cut at the World Cup doesn't make it any easier the second time around.

"I think this is tougher than four years ago," Kim said. "I was young and I really didn't know what was going on. It's disappointing, but I have to accept this as my fate. It's not as though I can turn back time."

In addition to Kim, midfielder Lee Chung-yong is another likely cut from the provisional team.

The 29-year-old was a controversial choice on the 26-man roster, given that he had played little for Crystal Palace in recent seasons and hadn't looked sharp when he did play. 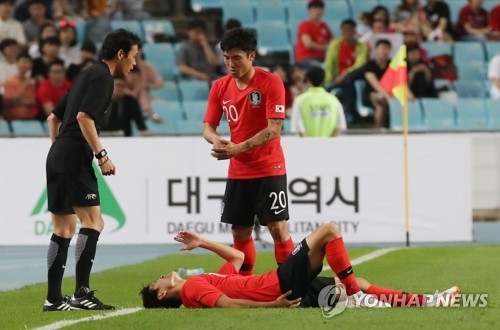 Shin said he wanted to give Lee another look and wanted some veteran presence on the team. Lee failed to respond to the coach's faith, as he was lifted with an apparent hip injury in the 55th minute against Honduras without having made much impact.

And Shin should have enough offense and playmaking from his current midfield corps. Lee Jae-sung, the reigning K League 1 MVP, scored South Korea's lone goal on Friday. Against Honduras, Moon Seong-min scored the team's second goal in a 2-0 victory in his very first international match.

And Lee Seung-woo, a former FC Barcelona youth product and the youngest player on this team at 20, also made an impressive international debut against Honduras. He set up Son Heung-min's opening goal in that contest, and flashed some of the skills that made him a highly-touted teen prospect.

The third cut will probably come from defense, since Shin carried 12 defenders, including six natural center backs, on the provisional team.

Shin has been tinkering with both back three and back four formations, and said after the match a tactical fit will be a key consideration in his final roster decision.

"We'll look into which players will be useful in what formations we may use at the World Cup," he said. "I wanted to give every defender a chance to play so I could select my final roster fairly, but that came at the cost of defensive cohesion tonight. We'll make sure we don't make similar mistakes at the World Cup."