Ki saw his 100th international match spoiled by BiH as South Korea suffered a 3-1 loss at Jeonju World Cup Stadium in Jeonju, North Jeolla Province, on Friday. The match against the Bosnians was South Korea's last home friendly before flying to their pre-World Cup training camp in Austria with final roster of 23 players on Sunday.

Instead of playing in the midfield, Ki started as one of the three defenders in South Korea's 3-5-2 system. He wasn't able to stop South Korea surrendering a hat trick to BiH's Edin Visca.

"We made too many mistakes," Ki said after the match. "I think we didn't prepare thoroughly."

The Swansea City midfielder said the players need to make progress from the defeat. South Korea will play two more friendlies in Austria before entering their base camp in Saint Petersburg in Russia. South Korea are in World Cup Group F with Sweden, Mexico and Germany.

"If the players learn and choose ways to improve from this defeat, it's going to serve as a good cure for us," he said. "But if we make the same mistakes, we'll see the same results."

Starting as center back in a three-man defense isn't completely new to Ki as he previously served that role with his Welsh club and the national team. He, however, admitted that teamwork and controlling their defense line wasn't good.

"I didn't play in the center back position often, so it wasn't really easy." he said. "But wherever I play, I know I have to lead the other players well. If I can train more, I think I can do better."

Ki said South Korea are underdogs at the World Cup and improving their defense is critical.

"Playing a back three or a back four isn't that important," he said. "We didn't pressure the opponents at the right time, our positioning and clearance also weren't perfect. We need to emphasize our defense instead of offense." 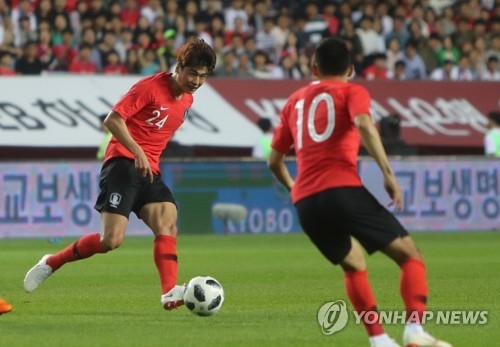