The Korea Football Association (KFA) said Kim Jin-su, Lee Chung-yong and Kwon Kyung-won were cut from the squad and will not travel with the men's national team for the World Cup in Russia.

South Korea, led by head coach Shin Tae-yong, are in Group F at the World Cup, with Sweden, Mexico and Germany.

Shin previously said he would select the final 23 members for the World Cup after playing two friendly matches at home. South Korea beat Honduras 2-0 on Monday, but fell 3-1 to Bosnia and Herzegovina on Friday. 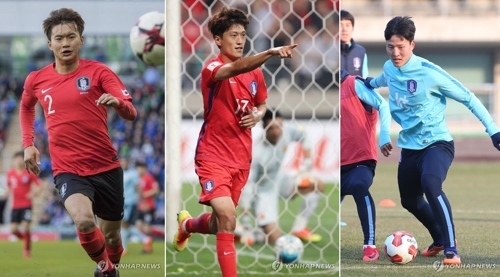 Kim, 25, failed to recover from the knee injury he sustained during a friendly match against Northern Ireland in March. The Jeonbuk Hyundai Motors left back didn't play in either of South Korea's World Cup tune-ups at home.

Lee, a veteran who has played in two previous World Cups, featured in the Honduras friendly, but didn't perform solidly. The 29-year-old had little playing time with his English Premier League club Crystal Palace this past season, which apparently influenced his performance with the national team.

Kwon failed to survive the competition among center backs. The 26-year-old, who plays with Chinese side Tianjin Quanjin, played against Bosnia and Herzegovina, but failed to impress.

South Korea will travel to their pre-World Cup training camp in Austria on Sunday with these 23 players. They'll play against Bolivia on June 7 and face Senegal on June 11 before departing for their World Cup base camp in Saint Petersburg on June 12.

South Korea will open their World Cup campaign against Sweden on June 18 in Nizhny Novgorod in Russia.