(ATTN: UPDATES with comments on China, other details in 5th para, last 7 paras)
By Lee Chi-dong

He said formally putting an end to the 1950-53 Korean War will be discussed in the summit. If realized, it would be a largely symbolic move but carry significant political implications in connection with the regional security landscape.

The Oval Office meeting is a highlight of a series of pre-summit consultations between the two sides taking place at Panmunjom on the inter-Korean border, in the U.S. and in Singapore. 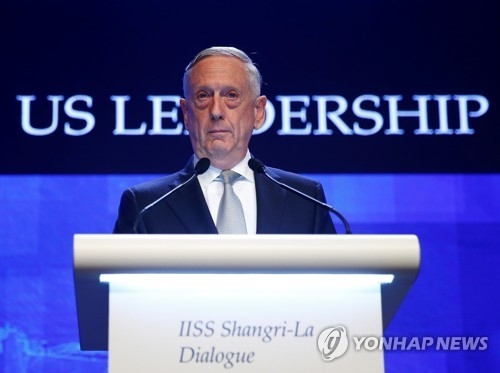 Mattis said the issue of scaling down the U.S. military presence in Korea or withdrawing the troops is "subject to, one, the Republic of Korea's invitation to have them there, and the discussions between the United States and the Republic of Korea, separate and distinct from the negotiations that are going on with the DPRK." He used the official name of South Korea and the abbreviation for the North's formal name, the Democratic People's Republic of Korea.

He said the allies could talk about the matter in the future in case of significant progress in efforts to reduce regional security challenges, apparently referring to the North's nuclear weapons and missile program.

Speaking at another session of the forum, South Korean Defense Minister Song Young-moo also said the stationing of USFK is a "separate issue from the North Korean nuclear issue."

He said USFK, a key element of the alliance, has played a key role in regional peace and security and it will continue to serve, with its role evolving to prepare for a new era.

Asked about whether the Trump administration is maintaining its policy of "maximum pressure" on Pyongyang and leaving "military options" on the table, meanwhile, Mattis avoided a direct answer.

He merely reminded the audience that the U.S. has stuck to a "diplomatically led" approach, as shown at the U.N. Security Council with regard to sanctions on the communist nation for its provocations.

The secretary earlier delivered a speech, titled "U.S. Leadership and the Challenges of Indo-Pacific Security," in which he reaffirmed Washington's pursuit of dismantling Pyongyang's nuclear program in a "complete, verifiable and irreversible" manner in close cooperation with Seoul.

"On the Korean Peninsula, we hold the line with our ally, supporting our diplomats who lead this effort," he said.

Speaking about China, he blasted it for the "militarization" of artificial features in the South China Sea. He warned that Beijing will face "larger consequences" for that.