SEOUL, June 2 (Yonhap) -- South Korea will speed up their 2018 FIFA World Cup preparations after they confirmed their final 23-man roster on Saturday.

The Korea Football Association (KFA) said that three players -- Kim Jin-su, Lee Chung-yong and Kwon Kyung-won -- were cut from their provisional roster and will not travel with the men's national football team to Russia, where the Taeguk Warriors will face Sweden, Mexico and Germany in World Cup Group F.

South Korean head coach Shin Tae-yong had said he would select the final 23 members for the World Cup after playing two friendly matches at home. South Korea beat Honduras 2-0 on Monday, but fell 3-1 to Bosnia and Herzegovina (BiH) on Friday. 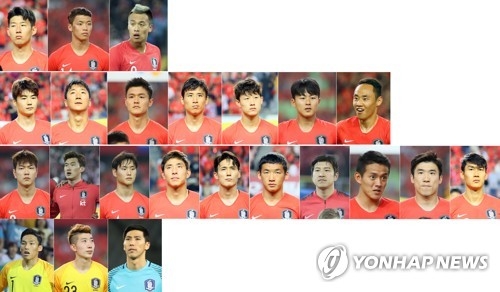 The two friendlies served both as a stage to test South Korea's tactics and a competition where players on the bubble make their case for the final roster cut. With the task of selecting a World Cup squad completed, South Korea will now take further steps in their World Cup preparations.

With 23 players, South Korea will fly to their pre-World Cup training camp in Austria on Sunday and will train intensively to upgrade their teamwork and tactics. They'll also have a friendly match against Bolivia on Thursday and another World Cup tune-up against Senegal behind closed doors on June 11.

South Korea will enter their World Cup base camp in Saint Petersburg in Russia on June 12, six days ahead of their first Group F match against Sweden.

The other 12 are from the domestic K League, with two players -- Ju Se-jong and Yun Young-sun -- becoming the first two World Cup members from a second division club in the national team's history. Defending K League 1 champions Jeonbuk Hyundai Motors put three players on the squad, the most of any club.

Ki is the most experienced, with 100 caps, while three players -- Lee Seung-woo, Moon Seon-min and Oh Ban-suk -- only have two appearances for the national team. All three players made their international debut in the Honduras friendly in Daegu on Monday.

The average age of the 23 players is 27.8, nearly two years older than that of the 2014 World Cup squad. Jeonbuk right back Lee Yong is the oldest player at age 32, with Lee Seung-woo being the youngest at 20.

The average height of the South Korean players is 182 centimeters, two centimeters shorter than the previous World Cup squad. Jeonbuk striker Kim Shin-woo is the tallest player at 196cm, while Lee Seung-woo and Go Yo-han are listed as the two shortest players on the roster at 170cm.