SEOUL, June 2 (Yonhap) -- South Korea will start their 2018 FIFA World Cup preparations away from home after completing their final roster of 23 players, but for those who missed the cut, the journey is now over.

The Korea Football Association (KFA) said Saturday that three players -- Kim Jin-su, Lee Chung-yong and Kwon Kyung-won -- were cut from their squad and will not travel with the national football team on their trip to the pre-World Cup training camp in Austria set to begin Sunday.

South Korea will face Bolivia and Senegal in Austria for their last World Cup tune-ups before going to their World Cup base camp in Saint Petersburg on June 12. South Korea are in World Cup Group F with Sweden, Mexico and Germany.

South Korea originally announced a provisional roster of 28 players, but Dijon FCO midfielder Kwon Chang-hoon and Gangwon FC forward Lee Keun-ho were dropped due to injuries. With this setback, South Korean head coach Shin Tae-yong had said he would exclude three additional players to confirm their final 23 members for the World Cup after playing two friendly matches at home.

South Korea beat Honduras 2-0 in Daegu on Monday, but fell 3-1 to Bosnia and Herzegovina (BiH) in Jeonju, North Jeolla Province, on Friday. 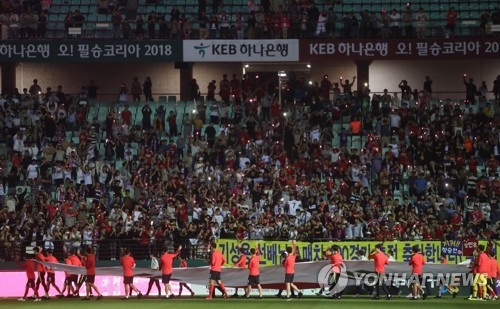 For the unlucky three, another four years will pass before they have a chance to play in football's showpiece event.

Kim Jin-su's exit was expected from the start, as he sustained a knee injury during a friendly against Northern Ireland in March and showed no signs of recovery. Shin had already hinted that the Jeonbuk Hyundai Motors left back would not be picked if he couldn't play, and Kim missed both of South Korea's home friendlies.

For Kim, it was an even worse blow, as he faced a similar fate four years ago. The 25-year-old made the final roster for the 2014 World Cup in Brazil, but was dropped at the last minute because of an injury.

However, the void left by Kim is not likely to be a big concern, as South Korea will have three players who can play in the left back position. Hong Chul and Kim Min-woo, both of whom play for military club Sangju Sangmu, are capable of covering the left side of the defense, while former Borussia Dortmund man Park Joo-ho, who is now with Ulsan Hyundai in the K League 1, can also play as left back. 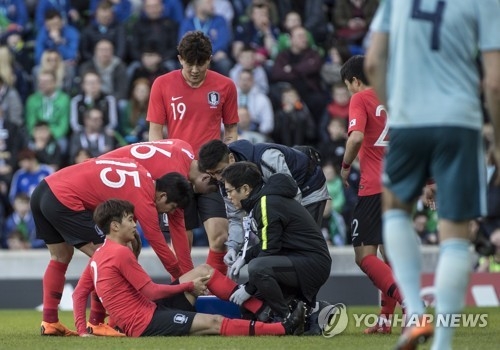 Lee Chung-yong is a veteran who was expected to lead young players with his two previous World Cup appearances. The 29-year-old midfielder, however, failed to prove that he was worthy of a place in the final squad after having little playing time with English Premier League side Crystal Palace this season.

Lee's absence makes team captain Ki Sung-yueng the only player on the South Korean roster with two World Cup appearances. Lee was also the second most capped player on the team with 79 internationals under his belt.

Although Lee's experience will be missed, South Korea will try to fill the void with young guns full of fighting spirit. The right winger or attacking midfielder spot in South Korea's back four system will be taken by reigning K League 1 MVP Lee Jae-sung.

The 25-year-old Lee is known for his penetration and ball keeping, along with his ability to win the ball in midfield. The Jeonbuk Hyundai Motors talisman was South Korea's only scorer in their defeat to BiH.

Two new faces on the national team can also play in Lee Chung-yong's position with more emphasis on attack. Hellas Verona attacker Lee Seung-woo, 20, and Incheon United winger Moon Seon-min, 25, had no senior national team experience prior to their selection to South Korea's provisional World Cup roster, but they made their respective cases for inclusion in the friendly against Honduras.

Lee assisted Son Heung-min's opening goal against the Central American team, while Moon scored his international debut goal in that match to seal South Korea's 2-0 win. Head coach Shin has expressed big hopes for the two players, especially for the match against Sweden.

Lee Chung-yong was also used as a right wing back in South Korea's back three system, but that role will be taken by Lee Yong and Go Yo-han, two right-sided defenders who play in the domestic K League 1. 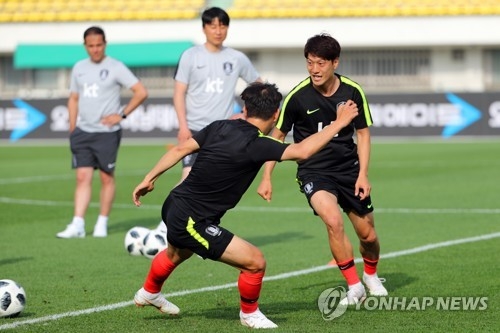 Kwon Kyung-won failed to survive the competition among the center backs. The 26-year-old, who plays with Chinese side Tianjin Quanjin, had his opportunity to make case for the final roster in the BiH friendly but didn't impress.

His exit means South Korea will take five central defenders -- Jang Hyun-soo, Kim Young-gwon, Yun Young-sun, Jeong Seung-hyeon and Oh Ban-suk -- to the World Cup. Among them, Jang didn't play a single minute in the two recent friendlies due to an ankle injury, but he earned a spot on the final roster for his previous national team performances.

With 51 caps, Kim is the most experienced defender on the squad, and Jang follows with 49 appearances. They will have to lead the other center backs who are less experienced.

Jeong only has six caps under his belt, while Yun has five. Oh made his international debut against Honduras as a second half substitute and played his second match for South Korea in the friendly against BiH. 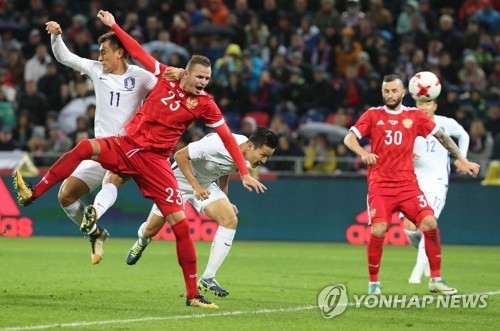