SEOUL, June 4 (Yonhap) -- The chief of the Bank of Korea (BOK) said Monday that central banks need to look for ways to deal with the new environment and that their monetary policy is losing effectiveness amid a decadelong low-rate trend.

"A lower neutral interest rate means that we have less room for policy rate cuts in the face of the economic downturn," BOK Gov. Lee Ju-yeol said in a welcoming speech at the BOK International Conference in Seoul. "It makes the interest rate more likely to reach its lower bound, making it difficult for us to address business cycles."

The two-day conference will open Monday with a number of renowned economists and experts, including Robert Hall from Stanford University and Thomas Sargent from New York University, attending

After years of quantitative easing by the central banks of world economic powerhouses, countries have lowered interest rates to near zero. The U.S. Federal Reserve kept its policy rate at near zero for several years in a bid to get out of an economic recession stemming from the 2008 global financial crisis, with the European Union and Japan lending support to monetary policy-led economic stimulus.

The BOK also lowered South Korea's base rate to a record low of 1.25 percent to support the economy.

More recently, however, in a time of rate rises, action on monetary policy has brought about weaker-than-expected results in some economies with far lower inflation rates.

"People feel greater uncertainty about our policies as both the overall environment and the responses are changing, possibly making our monetary policy less effective and less credible," Lee said. "Central banks need to communicate their policies more actively to reduce these uncertainties and manage people's expectations." 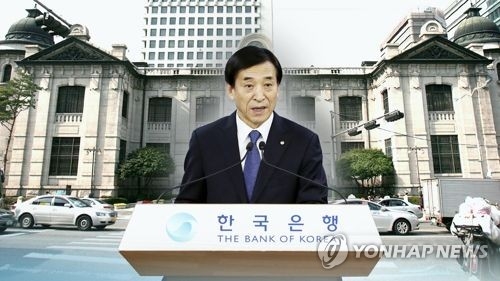