SINGAPORE, June 2 (Yonhap) -- The defense chiefs of South Korea and the United States had bilateral talks in Singapore on Saturday at a "historic moment" for regional security.

The meeting between Defense Minister Song Young-moon and Secretary of Defense Jim Mattis took place on the sidelines of the 17th Asia Security Summit, also called the Shangri-La Dialogue.

"We are meeting here at a historic moment," Mattis told Song at the start of the meeting, apparently referring to his country's plan to have its first-ever summit talks with North Korea.

"Our thoughts are with the diplomats," the secretary added, reaffiriming that the allies' defense authorities will continue to support diplomatic efforts to resolve the North Korean nuclear issue.

Shortly after the brief comments, media were asked to leave the meeting venue at the Shangri-La Hotel. 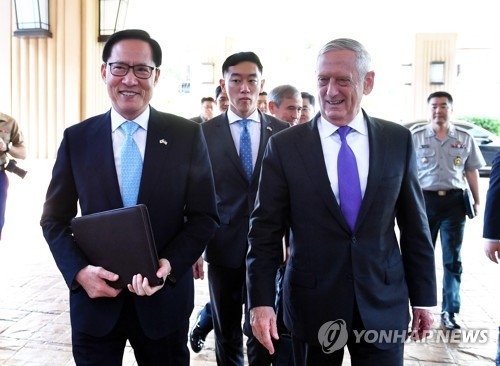 Emerging from the meeting with the Pentagon chief, which lasted about 45 minutes, Song told reporters that they agreed on the importance of close coordination between the allies in dealing with the North Korea issue at such a crucial time.

An aide to the minister said the issue of declaring a formal end to the 1950-53 Korean War was not raised.