SEOUL, June 3 (Yonhap) -- The secretary-general of the International Federation of Red Cross and Red Crescent Societies (IFRC), an international aid agency, has voiced hopes that ongoing diplomacy for peace on the Korean peninsula will create greater opportunities to support the socially vulnerable in impoverished North Korea.

Elhadj As Sy also floated the idea of holding a "humanitarian summit" in tandem with political dialogue to promote the "spirit of shared humanity" in the North.

"Building on the Panmunjom Declaration and building on the meeting on June 12, there will be more light at the end of the tunnel," As Sy told Yonhap News Agency, referring to the April 27 inter-Korean summit agreement and the proposed Washington-Pyongyang summit this month.

"That light will open new avenues for scaling up the (aid) programs, getting more support in the work that we are doing, and strengthening the partnership that will be alleviating much of the suffering," he added. 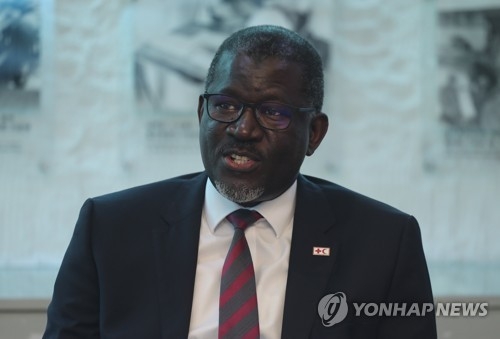 The secretary general of the Geneva-headquartered agency came here on Thursday for a three-day visit, during which he discussed current and future collaborative projects with the Korean Red Cross, and met with Seoul officials, such as Foreign Minister Kang Kyung-wha.

His visit came amid a flurry of diplomacy on Pyongyang, which recently professed a commitment to the "complete denuclearization" of the peninsula after years of nuclear and missile provocations that have resulted in crippling international sanctions.

North Korean leader Kim Jong-un is expected to hold a summit with U.S. President Donald Trump on June 12 in Singapore. The unprecedented meeting is likely to focus on Pyongyang's nuclear disarmament.

Kim has held two summits with South Korean President Moon Jae-in, on April 27 and May 26, accelerating an inter-Korean détente that began with sports diplomacy earlier this year and raising the prospect of greater cross-border exchanges.

The IFRC established its office in Pyongyang in 1995 when North Korea was struggling with a severe famine. It has since carried out various programs for emergency relief, disaster risk reduction, water sanitation, epidemic control and environmental protection.

Touching on constant concerns that any aid could end up in the hands of the North's military, the IFRC official pointed to mutual trust that has been built through its decades-long presence in the North.

"In the operations that we undertake everywhere in the world, including in North Korea, we put necessary safeguards for the appropriate management of resources, and North Korea is no exception," As Sy said.

Political challenges aside, As Sy noted that a greater problem arises from the scale of the need for assistance in the reclusive state.

"The challenges we face were less related to the political interference. The challenges were more about the scale of the needs and then the resources that are available," he said.

"Some of the vulnerabilities have been exacerbated in some form or another (due to the political situation), and the numbers of people in need were always well beyond what we were able to address. So there is still a lot of catch-up to do," he added.

Commenting on the IFRC's humanitarian mission, the secretary general noted that it goes well beyond just doling out commodities.

To instill such values, he envisioned a "humanitarian dialogue" with the participation of the two Koreas' Red Cross institutions and the IFRC.

"We can really instill those values in the behaviors, in the attitude, in the sense of common purpose and in the spirit of solidarity and shared humanity," he said. "Those are being seen as soft skills, but those soft skills are so important because (that is) the only one that can ensure the sustainability of any kind of dialogue."

As Sy plans to visit the North in the next six months to meet with the Red Cross staff there and top Pyongyang officials, such as the ministers of foreign affairs and health, he said.

As Sy has served as IFRC secretary general since 2014. Founded in 1919, the IFRC has some 190 member "national societies," including South Korea's Red Cross.