SINGAPORE, June 2 (Yonhap) -- South Korean Defense Minister Song Young-moo voiced optimism Saturday that the upcoming North Korea-U.S. summit will be fruitful, saying Pyongyang, with its young leader, is apparently different now from how it was in the past.

He was responding to a skeptical view publicly presented by Japan's defense chief, Itsunori Onodera, as they attended a plenary session at the Shangri-La Dialogue on "De-escalating the North Korea Crisis." It was joined by Canadian Defense Minister Harjit Singh Sajjan.

The Japanese official pointed out the North had repeatedly reneged on its nuclear deals and abruptly shifted to a provocative mode after a peace offensive.

Song asked him to let bygones be bygones.

"Mr. Onodera talked about the promises (that North Korea broke). It's what happened in the past. Its leader has changed," he said. "If we believe North Korea will trick us in the future as it did in the past, how can we negotiate with it and make peace?"

He added it's not appropriate either to question the survivability of the Kim Jong-un regime, although it's an important issue, at a time when the international community should focus on denuclearization and peace. 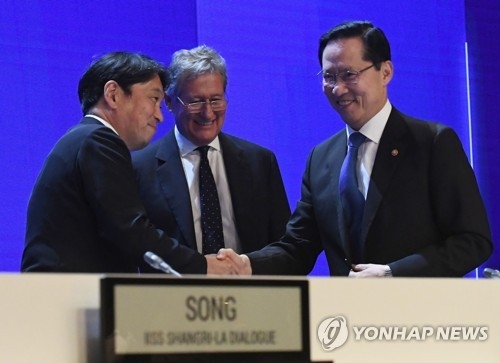 Introducing the liberal Moon Jae-in administration's approach toward the North, Song said it acknowledges the difference between the two Koreas.

"(We) will not pursue the collapse of North Korea, absorption-based reunification and artificial unification," the minister said.

He said the defense authorities of the two sides will take measures to reduce tensions in a "gradual and calm" way by reaching deals first on the easy-to-implement things.

The two Koreas plan to hold general-grade military talks at the truce village of Panmunjom on June 14 to follow up on the agreements reached at the two inter-Korean summits of recent weeks.

This will be two days after a bilateral meeting between the North's leader and U.S. President Donald Trump currently slated to be held in Singapore.

Trump raised the possibility that the relevant parties will soon declare a formal end to the 1950-53 Korean War, which finished in an armistice rather than a peace treaty.