Oh was roughed up for three earned runs on four hits in 2/3 of an inning in relief against the Detroit Tigers at Comerica Park in Detroit on Saturday (local time), as the Jays went down 7-4. Oh is now 1-1 for the season.

Oh entered the game in the bottom of the eighth as the Jays' third pitcher, with the score knotted at 4-4.

The right-hander retired Nick Castellanos on a fly out to right to begin the inning, but then trouble ensued.

Miguel Cabrera singled to center, and Victor Martinez got a ground-rule double to left-center field to put runners at second and third.

Oh intentionally walked Niko Goodrum to load the bases, and John Hicks knocked in two runs with a single to center.

The runners were now at the corners, and JaCoby Jones brought in the third run of the inning for the Tigers with a sacrifice fly to left.

Jose Iglesias' single chased Oh from the game, with the Tigers ahead 7-4. The Jays went on to lose by that same margin.

Oh entered the game on a five-game scoreless streak, and the shaky outing saw his ERA rise from 2.13 to 3.12.

The bullpen woes continued for the Jays. They had the second-best bullpen ERA in April at 2.28, but that number ballooned to 5.12 in May, 27th of 30 big league clubs. 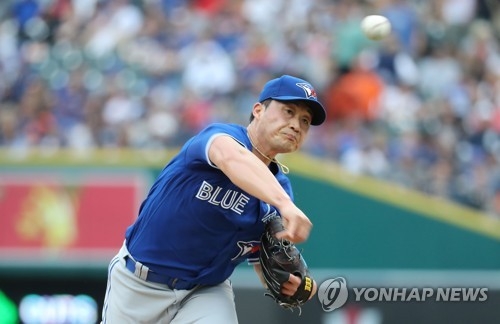