Batting sixth as designated hitter, Choi went 0-for-4 with two strikeouts against the Chicago White Sox at Guaranteed Rate Field in Chicago on Saturday (local time). The Brewers won the game 5-0.

Choi was called up by the Brewers the previous day, likely to use him as DH and pinch hitter against right-handers during their inter-league road trip. After facing the White Sox for another game Sunday, the Brewers will visit the Cleveland Indians on Tuesday and Wednesday.

This is Choi's third stint with the Brewers this season. He made the team's Opening Day roster, but was optioned to Triple-A after just one game.

With injuries to first baseman/outfielder Ryan Braun in mid-May, Choi was brought up for a five-game stretch, during which he went 3-for-14 with a home run and an RBI.

In his first game back this time, Choi grounded out back to the mound in the second, struck out in the fourth and flied out to center in the seventh.

He went down swinging in the eighth inning.

The long-time minor leaguer was batting .302 with five homers and 23 RBIs in 40 games in Triple-A this season at the time of his most recent call-up. 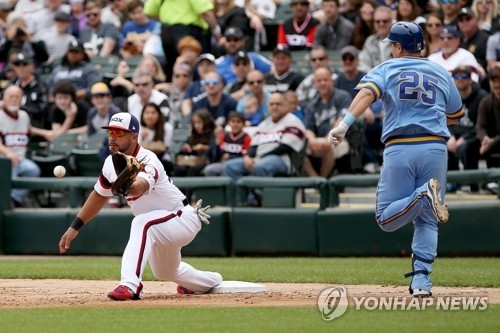