SEOUL, June 3 (Yonhap) -- Sales of mid-to-large sport utility vehicles (SUVs) surged 26.1 percent on-year in the first four months of 2018, fueled by the release of a new model and a general rise in consumer demand for such cars, industry data showed Sunday.

The Korea Automobile Manufacturers Association (KAMA) said sales of medium to large crossovers reached 85,968 units in the cited period compared to 68,155 the year before.

It said this year's total was 25.1 percent higher than the figures for the January-April period in 2015 and 19.5 percent larger than those from 2016, a clear sign of strong domestic demand.

Sales were helped by the launch of Hyundai Motor Co.'s new Santa Fe SUV, which has been completely refreshed and increased in size from the previous iteration, KAMA said.

South Korea's No. 1 carmaker said it sold 32,011 Santa Fe vehicles up till April, making it the single best selling model for the company in the country. 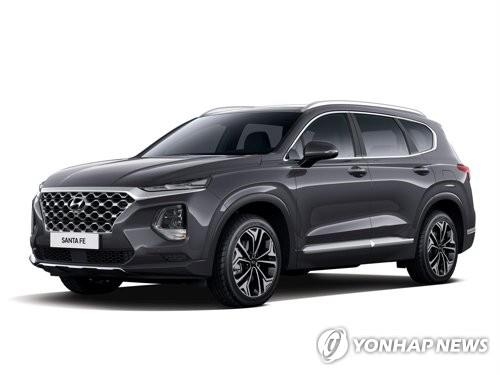 Sales of the new model, which reached customers in March, exceeded 10,000 for two straight months. This was followed by demand for Kia Motors Corp.'s Sorento mid-size SUV, which sold 23,961 units in the four months ending April 30. SsangYong Motor Co.'s Rexton models and the QM6 from Renault Samsung Motors Co. both posted good sales numbers. Even sales of the older large Mohave SUV by Kia reached over 3,000 units.

Industry watchers said that sales have generally gone up for all models this year. They said demand for imported SUVs rose 9.6 percent to 12,100 units with models like Ford Motor Co.'s Explorer selling 2,330 units. This was followed by models made by British carmaker Land Rover.

"There has been a trend towards SUVs for some time and the fact that the latest crossovers have grown in size has contributed to higher sales for medium-to-large size vehicles," a KAMA source said.

He said that plans by GM Korea Co. to launch the Chevrolet Equinox in the country in the near future will likely stoke more demand for larger SUVs.

In addition, Hyundai said it plans to unveil a large SUV that is bigger than the Santa Few within the year. Plans by its luxury marque Genesis to showcase its first ever crossovers in 2019, meanwhile, could further generate interest for such cars going forward, observers said.
(END)