SEJONG, June 3 (Yonhap) -- Some 327,500 people lost their jobs in the January-April period this year due to staff downsizing by their employers or company financial troubles, up 6.1 percent from the same period last year, government data showed Sunday.

People who left their jobs this year said they did so because of their employer, for instance by being dismissed or recommended for retirement.

Loss of company insurance is commonly used to gauge the labor market since more than 90 percent of the workers in key industries, including manufacturing, are subscribed to it. The number of people leaving due to employer financial troubles suggests that corporate and job market conditions are weakening. 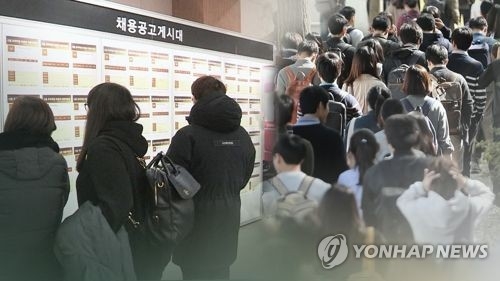 "Restructuring in the shipbuilding and auto industries likely affected the service industry as well," economics professor Lee Sang-min of Hanyang University said. "The consequent reduction in employment has emerged in phases."

Job market figures are being closely tracked as arguments grow over the increased minimum wage. The government argues that the raise will increase workers' incomes, which will lead to more consumption. Employers say higher wages will lead to layoffs because of higher financial burdens.

"The hike in the minimum wage could create more quality jobs in the long run, but it could have the effect of eliminating jobs in the short run," Lee said. "The steep rise in minimum pay could have influenced people losing their jobs due to employer needs."

Prof. Yoon Chang-hyun of University of Seoul urged caution against a slump in the labor market and across all industries. "There are repeated signs of deteriorating employment data," he said. "There is a chance that the conditions may worsen with time in the second or third quarter."
(END)