SINGAPORE, June 3 (Yonhap) -- U.S. Secretary of Defense Jim Mattis said there should be "no relief" to U.N.-led sanctions on North Korea until its full denucelarization, citing an expected "bumpy road" to negotiations.

"We can anticipate, at best, a bumpy road to the negotiations," he said at the opening of trilateral talks with his South Korean and Japanese counterparts -- Song Yong-moo and Itsunori Onodera -- held on the sidelines of the Shangri-La Dialogue, a security forum under way in Singapore.

As defense chiefs, the secretary said, "We must maintain a strong, collaborative, defensive stance so we enable our diplomats to negotiate from a position of strength at this critical time."

"North Korea will receive relief only when it demonstrates verifiable and irreversible steps to denuclarization." 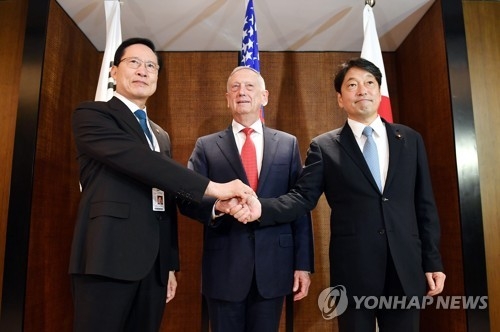 The South's minister also said he was "quite cautious," given the North's past behavior.

He pointed out, however, that the North has taken some "positive measures" recently, apparently referring to the release of three American prisoners and the purported demolition of its nuclear test site in Punggye-ri.

"We can look forward to a bright future and we must seize this opportunity," he stressed.

He urged the two sides to address the issues of the North's ballistic missiles and abduction of Japanese nationals decades ago. 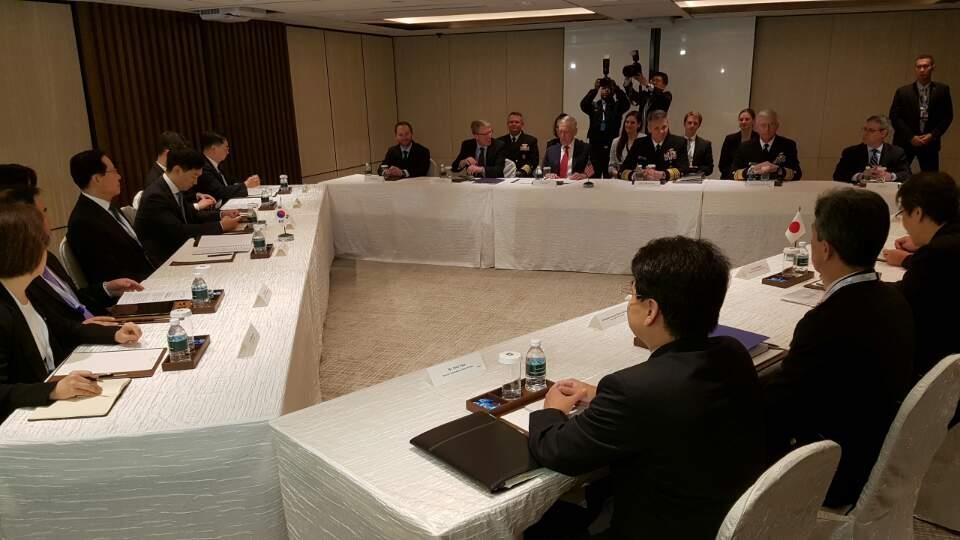 According to a joint press statement summing up the outcome of the gathering, the military leaders voiced the hope that the planned summit will contribute to "comprehensively resolving pending security and humanitarian issues."

They welcomed the North's removal of its nuclear-testing site following the announcement of a halt to its ballistic missile launches.

They pointed out that the security and prosperity of North Korean people will be "greatly improved" if Pyongyang faithfully abides by international obligations.

The Singapore meeting was the first three-way talks between them since last October, when they gathered in Clark, the Philippines, for the ASEAN Defense Ministers' Meeting-Plus.

(2nd LD) Mattis: No relief to sanctions on N. Korea until denuclearization

(2nd LD) Mattis: No relief to sanctions on N. Korea until denuclearization