Samsung Electronics was the first, releasing its Galaxy Wide 3 last month. It is the latest in the Galaxy Wide series and comes with a 5.5-inch screen, 32GB internal storage and a camera on the front and rear. Its shipping price is 297,000 won (US$259.41). The preceding models, the Galaxy Wide 1 and 2, have together sold 1.3 million units since their respective releases in 2016 and 2017.

LG Electronics will step in with its Q7 this month, the newest of its Q series. The Q7 sports a 5.5-inch 18:9 full vision display, QLens AI in the camera and DTS:X 3D surround sound, packing in many of the features of the high-end model, the G7 ThinQ. The price tag is expected to be between 450,000 won and 550,000 won.

China's Xiaomi is coming early next month with its Redmi Note 5. Its specifications include a 5.99-inch display, Qualcomm Snapdragon 636 chipset and dual cameras.

Hwawei is contemplating releasing a budget phone in South Korea sometime in the latter half of this year, separate from its flagship model P20, according to industry officials.

Apple Inc's iPhone SE 2, due to debut at its Worldwide Developers' Conference opening this week, is also in the pack. A follow-up to iPhone SE released in 2016, the newest version may be released domestically as early as next month, officials said. 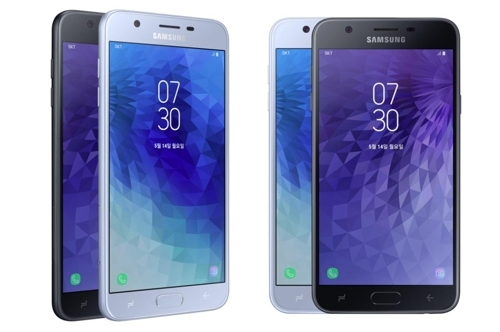