The new "data passes" for the Americas and Europe will allow the company's T roaming subscribers to avail themselves of 3 or 6 gigabytes (GB) of data for 30 days. The passes will be good for 15 countries in North and South America and 44 countries in Europe, SK Telecom said.

"Most T roaming clients who visit the Americas and Europe have been found to stay an average of 10 days and visit a number of countries while there," the company said. "By providing 30 days service and the ability to download data in many countries, SK is providing greater leeway to users."

In addition to the new pass service, SK said it is offering 1 GB of extra data to its customers between 18-29 who apply for "customized data download passes" when traveling in the Americas, Europe and Asia, as well as for its South Korea-Japan-China passes. 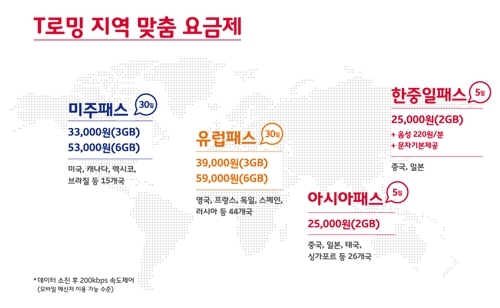