INCEHON, June 3 (Yonhap) -- South Korea's national football team head coach, Shin Tae-yong, said Sunday his side will try to fix the problems raised during their latest friendly matches once they set up their pre-World Cup training camp in Austria.

South Korea's 23-man squad for the 2018 FIFA World Cup will depart for Leogang, Austria, later Sunday to fine-tune their preparations for football's showpiece event in Russia. South Korea are in Group F with Sweden, Mexico and Germany.

"We'll fly to Austria and will prepare thoroughly for the long-awaited World Cup," Shin told reporters at Incheon International Airport before his flight. "I hope our fans, whether watching our matches on TV or cheering on the streets, can give us great support. We'll try to deliver good results to respond to their support." 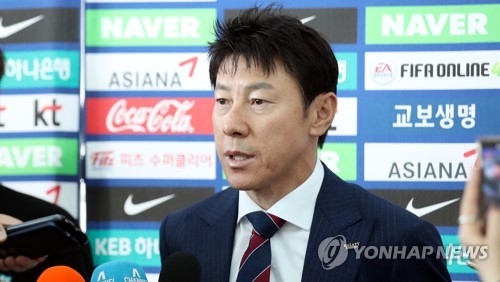 After announcing their provisional World Cup squad on May 14, South Korea beat Honduras 2-0 on Monday but fell 3-1 to Bosnia and Herzegovina on Friday in their two last World Cup tune-up matches at home. Shin finalized his final roster of 23 players on Saturday.

Shin vowed that South Korea would perform better at the World Cup after training in Austria. The Taeguk Warriors will have two more World Cup warm-ups in Austria before going to their base camp in Saint Petersburg, Russia. They will take on Bolivia on Thursday and face Senegal behind closed doors on June 11.

"We didn't show everything in the friendly matches," he said. "After we go to Austria, we'll strengthen our teamwork and will play a better game."

Although the World Cup was less than a month away at the time, Shin said he still had to test players in the friendlies at home. He originally announced a provisional squad of 28 players, but two players were dropped even before the friendlies due to injuries.

"Testing players right before the World Cup could be seen as a 'double-edged sword,'" he said. "I gave fair opportunities to all 26 players because if I dropped some of the players without giving them a chance to play, there could be complaints." 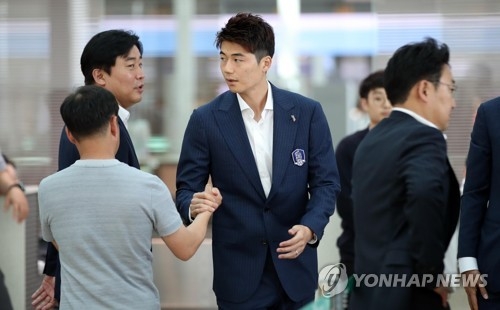 South Korean captain Ki Sung-yueng said the players are ready to give their all and will also play hard for their three teammates who didn't make the final roster. South Korea cut left back Kim Jin-su, midfielder Lee Chung-yong and defender Kwon Kyung-won to complete their final 23-man roster.

Ki, the most experienced player on the roster with 100 caps, said the players will try to stay healthy and improve their fitness in Austria.

"We have yet to meet fans' expectations, so we'll do our best," he said. "The players will also compete at the World Cup with a sense of urgency, so I hope many fans can give us support."