SEOUL, June 3 (Yonhap) -- Hyundai Motor Co., South Korea's largest carmaker, said Sunday that it will team up with Marvel Comics to promote the superhero film "Ant-Man and the Wasp."

The carmaker said it has formed a partnership with Marvel and will jointly market the Hollywood action film that is expected to reach theaters around the world starting in July.

The company said it secretly offered pre-production vehicles of its latest Veloster sporty hatchback and Santa Fe crossover for the movie's filming before they were unveiled. It added that its small Kona sport utility vehicle was also provided for the film, which is produced by Marvel and distributed by Walt Disney Studios.

"The movie, with its combination of humor and familiarity, perfectly coincides with Hyundai's image," a representative for the carmaker said.

He added that the film will highlight to advantage the excellent driving characteristics of Hyundai cars in the winding and up-and-down streets of San Francisco, where the film was shot.

The Veloster, Santa Fe and Kona are driven by the characters in the movie.

Hyundai already showcased the Veloster "Ant Car" at the Detroit motor show in January and plans to display it at future motor events in Seoul, Busan and Los Angeles. 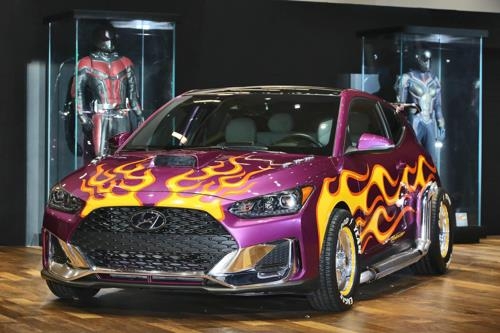