SINGAPORE, June 3 (Yonhap) -- Making his Shangri-La Dialogue debut, South Korea's military chief focused on convincing the world that it's worth resuming full-fledged denuclearization talks with a North Korea that appears to be different from what it was in the past.

Defense Minister Song Young-moo also vigorously sought to help keep a positive mood for the success of the North Korea-U.S. summit that will take place in Singapore on June 12.

Throughout the three-day forum, also called the Asia Security Summit, the minister faced a barrage of questions from other participants about whether the North is really serious about dialogue and denuclearization.

Some questioned the trustworthiness of the secretive communist nation, citing its track record of breaking nuclear agreements, either bilateral or multilateral.

Song asked them to let bygones be bygones, saying the North has a young leader who was educated in Europe and his country is confronted with different internal and external circumstances now. He met with the North's leader Kim Jong-un in person on the occasion of the two recent inter-Korean summits.

"If we believe North Korea will trick us in the future as it did in the past, how can we negotiate with it and make peace?" the minister said at a plenary session of the forum. 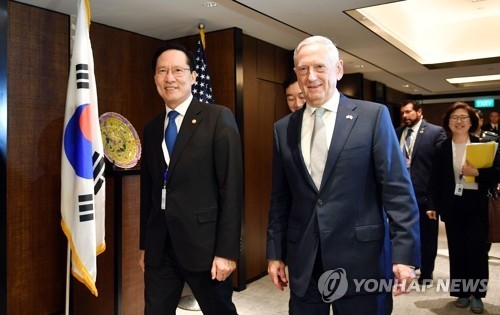 What's most important for now is to provide every support needed for the success of the North Korea-U.S. summit talks, he told reporters later.

His priority was, in fact, to highlight the importance of a successful summit and promote unity among the major countries that want to keep the momentum alive.

In a bilateral meeting with U.S. Secretary of Defense Jim Mattis held on the margins of the Shangri-La Dialogue, Song said there shouldn't be "even 0.1 mm of gap" between the allies in dealing with the North at this crucial juncture for regional security, according to defense sources.

He was quoted as suggesting that South Korean and U.S. defense authorities play a "low-key" role so as not to antagonize the North, although they should maintain a combat readiness posture.

The remarks are an indication that the allies will continue to stage their combined defense drills in a relatively low-profile manner for the time being.

Delivering a keynote speech, Mattis notably refrained from talking about the North's threats in contrast to his previous Shangri-La Dialogue address last year, which was laden with warning messages for Pyongyang's repeated provocations.

He instead stressed the goal of ridding the North of its nuclear weapons on the basis of the U.N. sanctions.

"Our objective remains the complete, verifiable, and irreversible nuclear denuclearization of the Korean Peninsula, and the international community is in alignment here, as evidenced by multiple unanimous United Nations Security Council resolutions," he said in his Saturday speech, titled "U.S. Leadership and the Challenges of Indo-Pacific security."

He spent much more time criticizing China's militarization of artificial features in the South China Sea.

It represented an apparent shift of the Pentagon's focus away from North Korea's threats and onto China's growing military assertiveness. 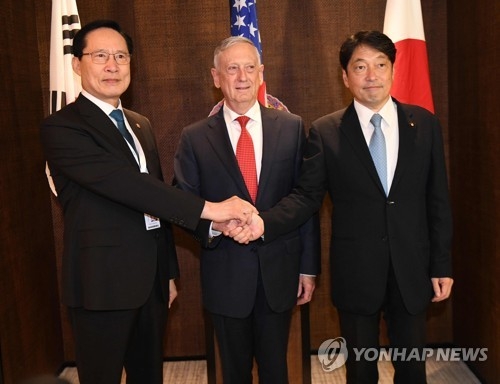 "We must maintain a strong, collaborative, defensive stance so that we enable our diplomats to negotiate from a position of strength at this critical time," he said.

He struck a cautious tone, though.

"We can anticipate, at best, a bumpy road to the negotiations," he said, adding there should be "no relief" to the U.N. sanctions on Pyongyang until its full denuclearization.

In Washington D.C., President Donald Trump voiced optimism about his meeting with North Korean leader Kim Jong-un but also indicated that Washington is gearing up for a "drawn-out" process, rather than mere "hours-long" talks and expectations of an immediate breakthrough.

The North hopes for a "phased, synchronized" implementation of any deal in exchange for a security guarantee and other incentives, while the U.S. is pushing for the denuclearization to be completed at the earliest possible date.