Batting leadoff and playing in right field, Choo went 1-for-5 with a run scored in a 3-2 extra-inning victory over the Los Angeles Angels at Angel Stadium of Anaheim in Anaheim, California, on Saturday (local time).

Choo has now reached base in 19 consecutive games and has hit safely in 10 straight.

His career high for the on-base streak is 35 games, set across the 2012 and 2013 seasons. Choo is also six games shy of matching his longest hitting streak, also set in 2013 while with the Cincinnati Reds.

Choo got his only hit of the game in the first inning, singling up the middle against the Angels starter Garrett Richards.

He popped out to third in the fourth and reached on an error by third baseman Jefry Marte in the seventh. Choo moved to second on Richards' wild pitch, and came around to score following back-to-back groundouts.

He struck out swinging in the ninth and flied out to center in the 10th. 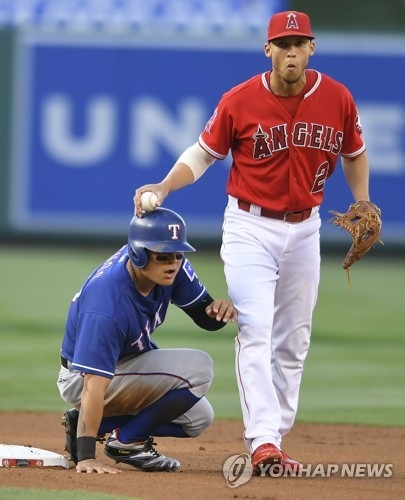