Big Hit Entertainment said 280,000 tickets for 21 shows in 10 venues during the "Love Yourself" tour sold out during the sales window from May 5 to June 1.

BTS will perform in Los Angeles, Oakland, Fort Worth, Newark and Chicago in the United States and Hamilton in Canada. In Europe, the seven-member group will stop in London, Amsterdam, Berlin and Paris.

BTS will kick off the tour on Aug. 25 at Olympic Stadium in Seoul. Tickets for the opening show have yet to go on sale.

BTS made history last week when its "Love Yourself: Tear" album debuted at No. 1 on the Billboard 200 albums chart, making the group the first K-pop act to top the chart. The lead single, "Fake Love," reached No. 10 on the Billboard Hot 100 singles chart, becoming the band's first top-10 hit and its best-performing song. 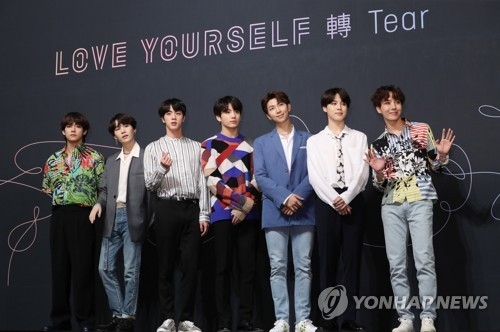