SEOUL, June 3 (Yonhap) -- South Korea and China agreed to double-track a key air corridor between Incheon and Mongolia with the aim of greatly reducing flight delays in order to benefit travelers, the government said Sunday.

The Ministry of Land, Infrastructure and Transport said the agreement was reached at a working level meeting in Seoul, with the change to be implemented by the end of the year.

The double-tracking will cover the 1,700 kilometers of the airway that is used by planes flying mostly to Mongolia, the Middle East, Russia and Europe from East Asia.

The ministry said one-way traffic will be observed to improve the flow of planes and flight safety.

Aviation experts said that due to the large number of planes on the route and the need to maintain safe distance between each jet, delays in flights from Incheon International Airport are very common. There were 1,344 flights that were delayed for more than an hour in 2016 due to congestion on the airway.

The ministry said that the decision to double-track the route can help 144,000 flights per year, with some 37 percent of the flights being South Korean flag carriers.

Seoul has been engaged in talks with Beijing on the issues since 2010 with the latest decision coming on the heels of a pact to double-track air routes to Southeast Asia. 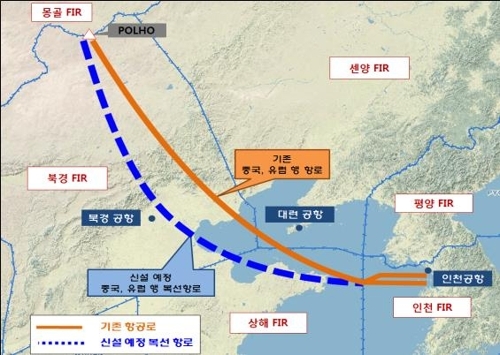