Last week, Moon said 90 percent of the effects of the minimum wage hike have been positive, sparking some criticism that the drastic hike in the minimum wage is to blame for a decline in income of low-income bracket.

The government raised the minimum wage by 16.4 percent to 7,530 won (US$7) on Jan. 1 this year, the biggest jump in about two decades, as part of Moon's efforts to promote income-led economic growth and reduce the pay gap between workers.

The monthly average income of the bottom 20 percent income bracket came to 1.28 million won in the January-March period, down 8 percent from a year earlier, Statistics Korea said last month, citing its statistics on real household income. It marked the sharpest drop since 2003, when the statistics office began to compile data.

On Sunday, Hong Jang-pyo, Moon's chief secretary for economic affairs, said the sharp decline in income of the bottom 20 percent of earners was "an unexpected result" and the presidential office instructed a state-run think tank to conduct a more thorough analysis to find out a cause.

Hong said income growth rates of South Koreans, except for the bottom 10 percent of earners, improved over last year's based on individual income, not household income. 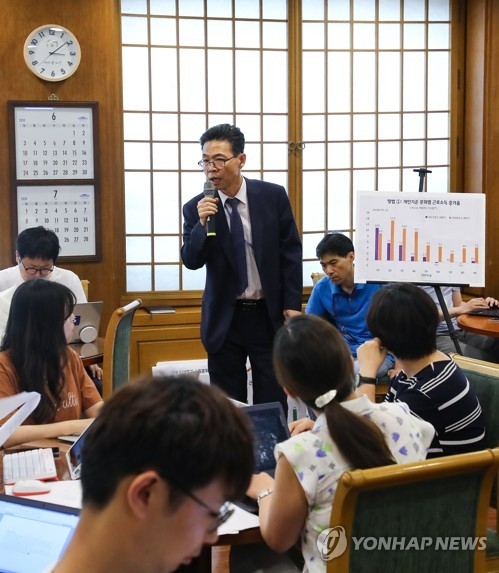 Income growth rates for 90 pct of S. Koreans up this year: presidential aide

Income growth rates for 90 pct of S. Koreans up this year: presidential aide