(ATTN: UPDATES throughout with search ending, quotes from tenants)

The injured woman, identified only by her surname Lee, 68, was the only one inside the building in Yongsan, central Seoul, when it collapsed around 12:35 p.m. More than 200 rescue workers searched the rubble with excavators, heavy equipment and sniffing dogs, and confirmed no one was buried.

Lee told fire officials that she felt the building suddenly rocking and tried to get out of it. It was when she almost reached an entrance that the building collapsed. Rescue workers saved her as soon as they arrived at the scene.

Four vehicles parked next to the building were also damaged.

The restaurants on the building's first and second floors were closed for Sunday. If they had been open, the casualties would have been worse. Its third and fourth floors were used as homes by three households of four people, but all but Lee were out at the time.

Some witnesses said they heard an explosion, but fire officials said it has not been confirmed if there was one. A restaurant employee near the building said that he heard a bang and smelled something burning before he came out of the restaurant and saw that the building had collapsed.

Officials said the building was constructed in 1966. They ordered the evacuations of three other nearby buildings out of concern about possible collapse.

Police plan to question the building's owner and witnesses to determine the exact cause of the collapse.

One tenant, surnamed Jung, 31, claimed that the building began showing cracks and other warning signs of collapse about a month ago. He also claimed he reported those signs to the Yongsan Ward office, but the office took no safety measures.

"I found a crack in the building on May 9. I took a picture of it and sent it to the Yongsan Ward office by email. The office said they would come take a look, but I haven't heard from them." 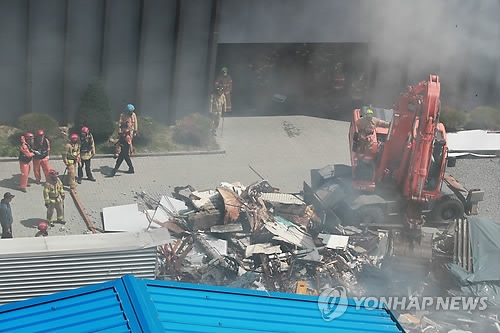