SEOUL, June 4 (Yonhap) -- A Seoul court on Monday held a hearing to review the prosecution's request for an arrest warrant for the wife of the chief of Korean Air Lines Co.

Lee Myung-hee, 69, is accused of taking advantage of her status to routinely assault, insult and injure people.

"I am sorry," she told reporters before she entered the Seoul Central District Court to attend the arraignment hearing.

Prosecutors filed for her arrest warrant late Thursday. The court is expected to deliver its decision late Monday or early Tuesday.

Lee, the mother of a former Korean Air vice president who became infamous for her "nut rage" incident, now faces seven counts of aggravated assault, obstruction of business, insult and other charges.

Lee allegedly hurled a pair of pruning shears at a security guard at her home in Seoul for failing to take care of the house's door properly. She was also accused of kicking her chauffeur on the street for making a mistake, and shoving and cursing at construction workers hired for a hotel expansion project.

The suspicions amount to 24 cases of violence against 11 people between August 2011 and March this year.

She has denied any wrongdoing. 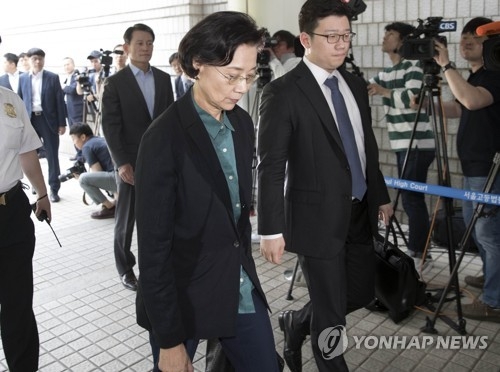