The movie starring Cho Jin-woong and Ryu Jun-yeol drew 981,436 viewers over the weekend, according to the computerized box-office tally from the Korean Film Council.

It has stayed atop the box office for 13 days in a row since it was released May 22, with its cumulative reaching 3.5 million. 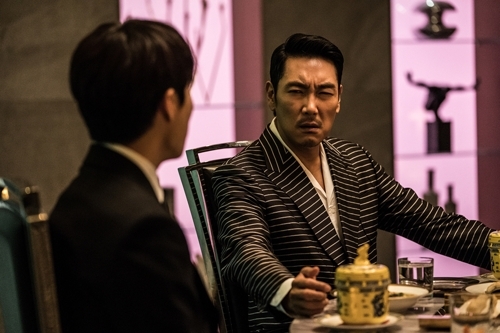 A remake of the Hong Kong crime thriller "Drug War" (2012) by Johnnie To, the new film tells the story of the unlikely partnership between police anti-drug unit officer Won-ho and low-level drug dealer and informant Rak as they take down a massive Seoul-based international drug cartel to which the latter once belonged.

The R-rated American superhero film "Deadpool 2" added 230,614 to its domestic total of 3.61 million tickets sold in its third weekend at the box office.

Disney and Marvel Studios' "Avengers: Infinity War" remained strong at No. 3, with 71,690 admissions in its sixth weekend. This new number brought the movie's cumulative total to 11.136 million in the country.