SEOUL, June 4 (Yonhap) -- South Korea is still watching how negotiations between the United States and North Korea are going to determine whether President Moon Jae-in should fly to Singapore to join U.S. President Donald Trump and North Korean leader Kim Jong-un in declaring an end to the Korean War, an official said Monday.

The possibility of Moon traveling to the Southeast Asian nation gained traction after Trump said last week following a meeting with senior North Korean official Kim Yong-chol that his June 12 summit with the North's leader could include formally ending the war.

But a presidential official said no decision has been made yet on Moon's possible trip to Singapore.

"It's not that our government has entered into full-fledged preparations to join the North-U.S. summit," the official told reporters. "We're keeping an eye on negotiations between the North and the U.S. on the agenda."

The official also said the South is working closely with the U.S. on negotiations with the North, but declined to comment on the contents of a letter that the North's leader sent to Trump. 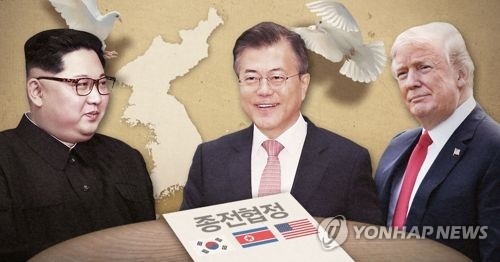 No decision yet on whether Moon will travel to Singapore: official

No decision yet on whether Moon will travel to Singapore: official