SEJONG, June 4 (Yonhap) -- A major state-run think tank warned Monday that a drastic rise in the legal minimum wage could lead to a drop in employment and advised the government to take a flexible approach to adjusting the pay system.

The government said the hike is aimed at income-led economic expansion and a reduction of the pay gap between workers, but critics argue that the increase is actually hurting entry level jobs and weighing down the local economy.

In a report, the Korea Development Institute (KDI) estimated that up to 84,000 jobs have been lost after the wage hike took effect this year, but the real impact on the labor market might be much smaller than expected due to the government's financial support for small business owners.

The KDI said, however, that the planned drastic increase could result in a sharp drop in employment and it advised the government to carefully weigh the raising of wages.

Finance Minister Kim Dong-yeon said earlier that it may be premature to analyze the new system's impact at this point and that the government may adjust future minimum wage raises to minimize the ripple effects on the local economy. 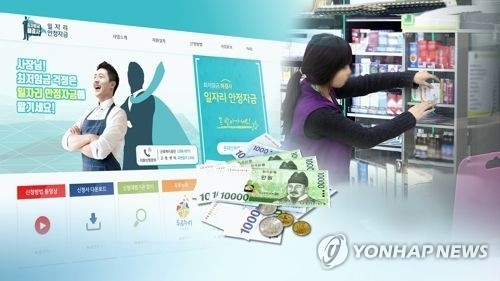