SEOUL, June 4 (Yonhap) -- South Korea's No. 1 business group Samsung is focusing on global expansion amid a series of challenges at home, including allegations of accounting fraud in its bio unit and the fallout of a dividend error at its securities affiliate, industry watchers said Monday.

The conglomerate decided not to hold a ceremony to mark the 25th anniversary of the so-called Frankfurt Declaration made by Samsung Electronics Co. Chairman Lee Kun-hee, who famously called on all employees to change everything other than their spouses and kids, during a trip to the European city in 1993. The declaration, which stressed the need for sweeping changes within Samsung, is considered a milestone for the conglomerate that has since become a global player in key business areas, such as chipmaking, displays and smartphones.

The muted anniversary comes as a number of its business units have been embroiled in scandals despite the conglomerate's solid earnings and growing presence in the global market.

Its bio unit, Samsung Biologics Co., for one, is under review over allegations of accounting irregularities. Financial authorities are expected to hold a meeting this week in a bid to reach a final ruling over the controversy.

Prosecutors raided Samsung Securities Co. last week as part of an investigation into a massive dividend error by the unit, which resulted in an accidental stock issuance in April, while the business group's flagship unit, Samsung Electronics, is suspected of sabotaging employees' efforts to form a labor union.

The Frankfurt Declaration celebration event did not take place in 2017 as well, as Samsung Electronics Vice Chairman Lee Jae-yong, the de facto head of the conglomerate, was jailed for bribery in a corruption scandal that led to the ouster of former president Park Geun-hye.

The elder Lee, meanwhile, has been hospitalized since suffering a heart attack in May 2014.

Amid such unfavorable conditions, the business group has been revving up efforts to bolster its presence overseas, actively responding to China's drive to expand its semiconductor business, as well as to trade pressure from the United States, market watchers said. 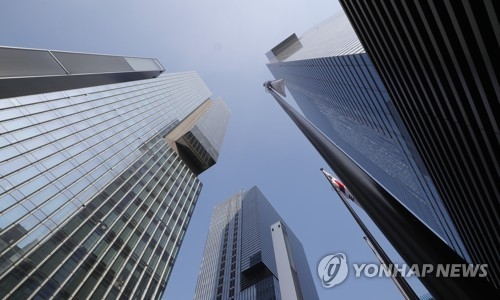