SEOUL, June 4 (Yonhap) -- Ahn Cheol-soo, a Seoul mayoral candidate, said Monday that the United States should maintain its troops in South Korea "for a considerable period of time" even if a peace treaty to end the Korean War is signed.

Ahn of the minor opposition Bareumirae Party added that North Korea's denuclearization should be made in a "complete, verifiable and irreversible" manner and the Seoul-Washington alliance should also be the firm basis for carrying forward negotiations with the North.

"It is possible for the armistice parties to agree on the declaration of the end of war, put down their guns and then reach a peace agreement through negotiations," Ahn said in a prepared English speech at a meeting with foreign journalists based in Seoul.

"But it is my opinion that the U.S. Forces in Korea should remain stationed for a considerable period of time even after a peace treaty is concluded," he said. 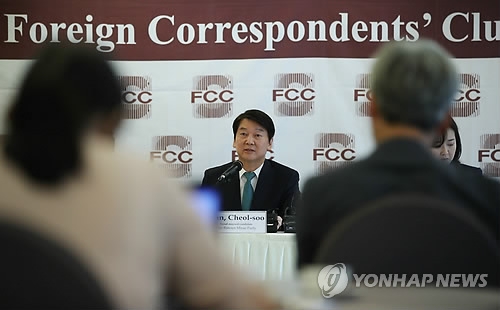 A planned summit between the U.S. and the North on June 12 in Singapore is raising the possibility of an end to the 1950-53 Korean War.

Ahn, a former presidential candidate, is competing against Park Won-son, the current Seoul mayor and front-runner for the June 13 local elections.

Park, seeking his third term as the capital's mayor, is leading the race with nearly 47 percent, compared with 20 percent for Ahn and 13 percent for Kim Moon-soo of the main opposition Liberty Korea Party, a recent poll showed.

Ahn was a front-runner ahead of the 2011 by-election for Seoul mayor but later dropped his bid and supported Park.

He lashed out at Park's seven-year performance, describing him as "basking in Michael Jackson's moonwalk dance" in which the Seoul city moves backwards while apparently walking forwards.

"If Park gets four more years, Seoul will not be able to recover. So, I feel like I should give him a rest," he said.

Ahn went on to say that if elected, he plans to open a competition among hackers from the two Koreas to reduce the threat of cyber attacks and give North Korean hackers job opportunities.

He also said that he will develop an inter-Korean economic cooperation model that could create jobs for Seoul citizens and prompt the Seoul government to provide humanitarian aid to North Korea on a regular basis.

"There should be no declaration of ending the war, the signing of a peace treaty and withdrawal of U.S. troops until North Korea's nuclear arsenal is dismantled," Kim said in a press briefing with foreign correspondents.

He also rejected the possibility of him unifying his candidacy with Ahn to run against Park.

"I think that seeking a single candidacy is almost impossible, given time left (ahead of the elections)," Kim said.

"An office of the Seoul city government will open in Pyongyang someday. New jobs will inevitably increase," Park said in a meeting with college students.

He also stressed the need to embrace North Korean defectors as social members to enable them to better adapt to the South. 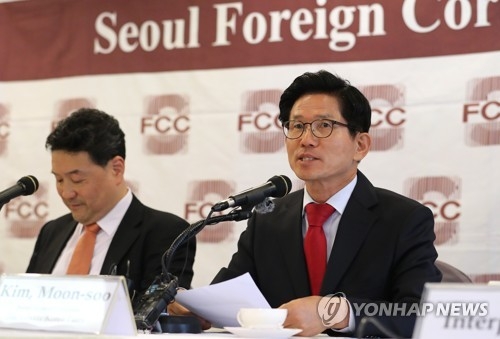