SEOUL, June 4 (Yonhap) -- President Moon Jae-in was set to hold a summit with Philippine President Rodrigo Duterte on Monday to discuss ways to bolster economic and other cooperation between the two countries.

Duterte arrived in Seoul on Sunday for a three-day visit. He is the first head of state from an Association of Southeast Asian Nations (ASEAN) member country to visit South Korea since Moon took office in May last year.

Monday's summit will be the second meeting between Moon and Duterte. They first met in the Philippines in November on the sidelines of the ASEAN+3 Summit and East Asian Summit (EAS).

During Monday's talks, Moon is expected to seek support for his push for peace on the Korean Peninsula.

The two sides plan to sign a memorandum of understanding specifying ways to cooperate in transportation, trade, renewable energy and science and technology, officials said.

After the summit, Moon plans to host a banquet for Duterte and Philippine officials. 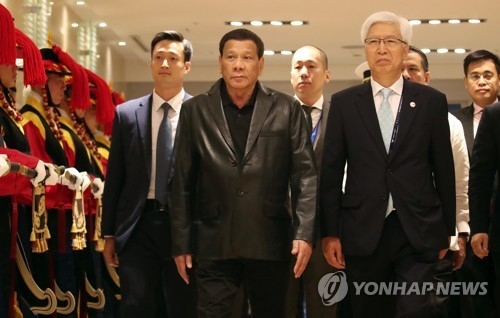