SEOUL, June 4 (Yonhap) -- U.S. and North Korean officials held working-level talks at the border truce village of Panmunjom on Monday for the third consecutive day to prepare for their summit slated for next week.

The meeting's apparent purpose was last-stage negotiations over the agenda for the historic summit between U.S. President Donald Trump and North Korean leader Kim Jong-un, slated to take place in Singapore next Tuesday.

Sung Kim, U.S. ambassador to the Philippines and former nuclear envoy, is leading the U.S. delegation while the North's team is headed by Pyongyang's Vice Foreign Minister Choe Son-hui. They met in the same place on May 27, Wednesday, Saturday and Sunday.

The two sides are expected to focus on narrowing the gaps over how to achieve Pyongyang's complete, verifiable and irreversible denuclearization (CVID) and offer in return Washington's security guarantee in the same CVI manner.

The two sides could also discuss the issue of declaring a formal end to the 1950-53 Korean War.

Trump has told reporters that he talked about "ending the war" during his meeting with Kim Yong-chol, a vice chairman of the central committee of the North's ruling Workers' Party, at the White House on Friday. Seoul has been pushing for a political declaration to end the war, possibly through a three-way summit among Moon, Trump and Kim.

Last Friday, Trump put the planned summit with Kim back on track after he canceled it on May 24, citing "open hostility" from the communist regime. The reversal came after a conciliatory gesture from Pyongyang and Seoul's mediation. 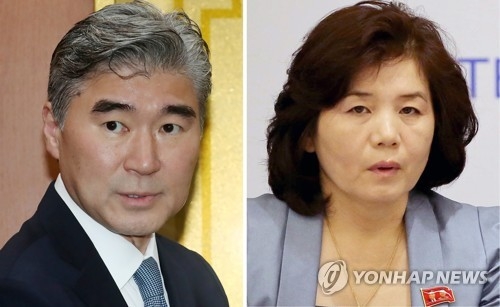