INCHEON, June 4 (Yonhap) -- A former vice president of Korean Air Lines Co., notorious for her tantrum over nuts that delayed a flight in 2014, appeared at the customs office on Monday to be questioned over smuggling and tax evasion allegations.

She bowed her head and said, "I am sorry."

The eldest daughter of Hanjin Group Chairman Cho Yang-ho is suspected of bringing personal goods purchased overseas into the country without paying taxes. She allegedly had them delivered to her via Korean Air planes.

The customs office is expected to grill her on the allegations. The authorities confiscated some 2.5 tons of suspected smuggled goods that may have belonged to Cho from a Korean Air subcontractor and company officials' residences.

The latest is a series of public appearances by the disgraced Cho comes less than two weeks after she underwent interrogation by the immigration office late last month over allegations that she and her family had illegally hired more than a dozen housekeepers from the Philippines.

The probe into her alleged smuggling is the latest in a spate of ongoing investigations against the Cho family, which controls the hotel and logistics conglomerate.

Her mother, Lee Myung-hee, is on the verge of arrest over multiple aggravated assault charges as a Seoul court is reviewing her arrest warrant on the same day. Her younger sister has also been investigated over assault allegations and her brother faces suspicions over unfair acceptance into a university with ties to Hanjin. 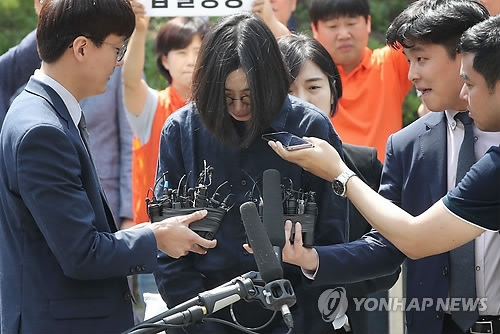