SEOUL, June 4 (Yonhap) -- The two Koreas and the United States' move to discuss an end to the 1950-53 Korean War will be a starting point for bringing a permanent peace to the Korean Peninsula, the chief of the ruling party said Monday.

After meeting a senior North Korean official in Washington last week, U.S. President Donald Trump raised the possibility of discussing a formal end to the war when he meets North Korean leader Kim Jong-un on June 12 in Singapore.

"Discussions over an end to the war will be a starting point for setting up a permanent peace regime (on the peninsula)," Choo Mi-ae, the chairwoman of the ruling Democratic Party (DP), said.

"The DP will support a successful U.S.-North Korea summit and do its part to establish peace on the peninsula through the declaration of the war's end and a peace treaty."

At their summit in late April, President Moon Jae-in and Kim Jong-un agreed to seek to declare an end to the Korean War this year and work towards a peace treaty.

The two Koreas remain technically at war as the Korean War ended in a truce not a peace treaty. 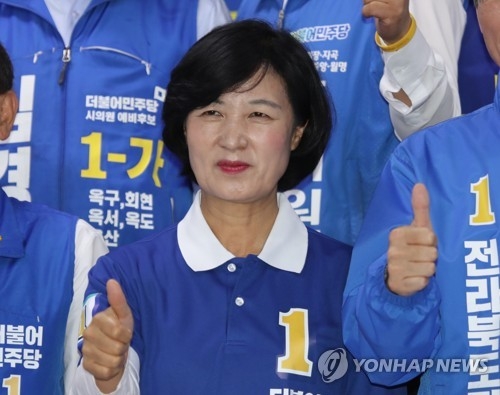 Discussion over end to Korean War to be start point for permanent peace: Choo

Discussion over end to Korean War to be start point for permanent peace: Choo