SEOUL, June 4 (Yonhap) -- A Seoul scholar on Monday urged the two Koreas to study various ways to bring about real peace on the Korean Peninsula instead of blindly pursuing a peace treaty.

Park Tae-gyun, a professor at the Graduate School of International Studies of Seoul National University, said that a non-aggression treaty could be an alternative if a peace treaty is seen as too difficult to achieve.

"A non-aggression pact is a lower level treaty than a peace treaty and it has been rarely used since World War II. But it will be wiser to secure even low-level treaties one by one than fail to produce any treaty after drawn-out negotiations," Park said in a contribution to the latest issue of quarterly magazine "Critical Review of History."

In this regard, he suggested, a revision of the armistice agreement should also be considered. 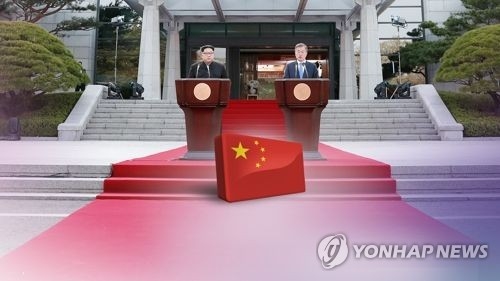 The professor's advice came after U.S. President Trump floated the idea of declaring an end to the Korean War ahead of his planned meeting with North Korean leader Kim Jong-un in Singapore on June 12.

In their recent summit talks, South Korean President Moon Jae-in and Kim also agreed to work toward a peace treaty by the end of the year. Some 28,500 American troops are currently stationed in South Korea to deter North Korean aggression after the 1950-53 Korean War ended in a ceasefire rather than a peace treaty on July 27, 1953.

Professor Park called for various options, including a revision of the armistice treaty, to secure substantial peace on the peninsula rather than a blind pursuit of a peace treaty.

"If the North Korea-U.S. summit fails to produce a satisfactory outcome, we can insert clauses, such as about the Northern Limit Line and the U.N. commander, into the armistice agreement. It will require an overall amendment of the armistice treaty, though it is not its abolition," said Park.

He then said China, as a signatory to the armistice treaty, has the right and obligation to participate in the declaration of the end of the war and peace treaty.

"Considering the current U.S.-China relations, the two may fail to achieve a shift to a peace treaty. Unlike ending the war, a peace treaty could be signed by the two Koreas alone," he explained.