SEOUL, June 4 (Yonhap) -- The head of an international Red Cross organization said Monday that he is ready to expand support for North Korea amid expectations that improving inter-Korean relations could lead to a demand for more professional skills and experience with humanitarian issues.

Peter Maurer, head of the Switzerland-based International Committee of the Red Cross (ICRC), said that his organization's humanitarian work in the North has been "modest" and that more should be done to improve the situation in such areas as health, water and sanitation.

"The issue of separated families has been the concern for the ICRC since the Korean War and we have, over the decades, always tried to carve out neutral and impartial political space in which solutions for separated families, family reunions, family reunification, clarification of (the) destiny of missing people could be found," he said in an interview with Yonhap News Agency.

"We hope that the new development may offer new opportunities, and the ICRC is ready to play the role of a neutral intermediary, if necessary, and to offer its services, also its technical services if this is accepted and desired by the two countries and by the two national societies," he added. 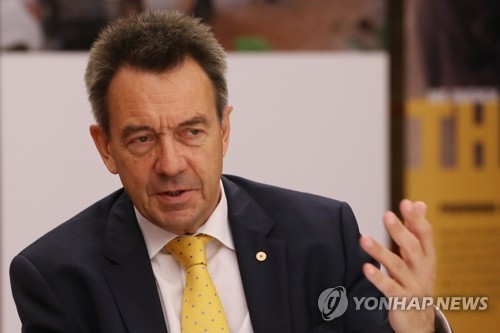 South and North Korea have seen their long-frozen relations improving in recent months following the historic back-to-back summits between their leaders in April and May, during which they agreed to halt all forms of hostile acts and expand cross-border cooperation.

As part of the agreements, they also promised to hold a reunion of families separated by the 1950-53 Korean War and recently decided to hold a Red Cross meeting later this month to discuss details for the event expected to be held mid-August.

The reunion, if held, would be the first since October 2015. According to the unification ministry, which handles inter-Korean issues, about 55 percent of an estimated 131,530 South Koreans on the waiting list for reunions had died as of the end of March.

He also underlined the importance of a neutral third party in finding solutions to tricky problems and said that his organization could play that role when the two Koreas tackle such humanitarian issues.

"All our skills and all our experiences are available to the Korean national societies ... to find rapid solutions for their outstanding problems," he added. "Most of the successful processes of identifying missing people and uniting families worldwide are executed through trilateral mechanisms and trilateral agreements between the ICRC and the respective countries."

Explaining major areas of interests for the ICRC worldwide, Maurer said that its program in the North has been relatively modest, frequently hampered by political and financial restrictions.

But he expressed hope for a more "ambitious" program in the North, highlighting health, water, and disaster preparedness and prevention as areas where his organization could increase its work.

With regard to the controversy sparked by a media report over 12 female North Korean restaurant workers and a manager who defected to the South in 2016, Maurer said that he is well aware of it and added that he is prepared to play a "neutral intermediary" role to address the relevant concerns.

Recently, a local cable TV network aired an interview with the restaurant manager, who said that he coerced the other employees to come with him to the South at the instruction of Seoul's spy agency.

The government said they all came here voluntarily, but Pyongyang has called for their repatriation, saying that a Seoul spy lured them to the South. It has ignited a debate on the possible return of defectors to the North.

"We are very much aware of the issue. We are also aware that this is part of the discussion between the ROK and the DPRK," he said. "If the ICRC has a neutral intermediary role to clarify the will and the wish and the desire of the 12 waitresses, we are always happy and available to play that role."

As for a possible return of any defectors to the North, he emphasized such a decision should be made after allowing them to express their will "freely" and "independently."