BEIJING, June 4 (Yonhap) -- A senior North Korean official departed for Pyongyang through a Beijing airport on Monday, after a high-stakes visit to the United States to prepare for a summit between U.S. President Donald Trump and North Korean leader Kim Jong-un.

Kim Yong-chol, a vice chairman of the North's ruling Workers' Party's central committee, and other North Korean delegates boarded a plane of the North's flag carrier Air Koryo at Beijing Capital International Airport at around noon.

While walking towards a departure gate, the official avoided questions from reporters about his four-day trip last week, which included separate talks with Trump in Washington and Secretary of State Mike Pompeo in New York.

Trump put the proposed summit back on track following his talks with the North Korean official on Friday, eight days after he canceled it, citing "open hostility" from the communist regime. The summit is now set to be held in Singapore next Tuesday.

Kim, who also serves as the director of the United Front Department, a party organ in charge of inter-Korean relations, arrived in Beijing on Sunday evening after the trip to the U.S. Some observers said he might have met with Chinese officials upon arrival to explain the outcome of his meetings with Trump and Pompeo.

During talks with Trump and Pompeo, Kim reportedly discussed key summit agenda items, such as denuclearization methods, timelines and security assurances for the reclusive state.

After seeing off Kim at the White House, Trump appeared to have eased his initial demand for a swift and stringent denuclearization of the North.

"I told them today, 'Take your time. We can go fast. We can go slowly.' But I think they'd like to see something happen," Trump told reporters.

Trump added that he does not even want to use the term "maximum pressure" anymore, referring to the campaign to pressure Pyongyang through economic sanctions, diplomatic isolation and military threats.

A major bone of contention is the denuclearization method and the pace of its implementation.

Pyongyang has called for a "phased, synchronous" approach, which critics have said is a rehash of old tactics meant to protract negotiations and wring out more concessions. Washington reportedly favors a fast nuclear disarmament process, which could entail a rigorous verification process and the disposal of chemical and biological weapons, and ballistic missiles. 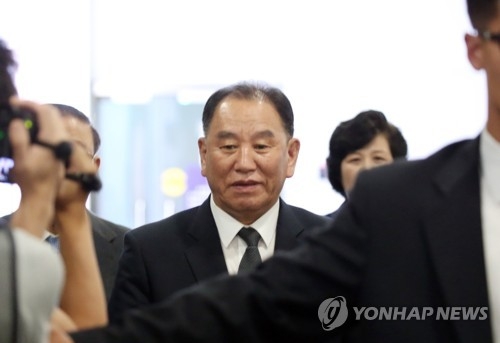 Senior N.K. official departs for Pyongyang from China after high-stakes visit to U.S.

Senior N.K. official departs for Pyongyang from China after high-stakes visit to U.S.