SEOUL, June 4 (Yonhap) -- Things went from bad to worse for the Nexen Heroes in the Korea Baseball Organization (KBO) over the weekend.

Already mired in a slew of off-field problems, the Heroes lost their No. 1 starter Esmil Rogers to a broken finger on his right hand during Sunday's game against the LG Twins.

Rogers put his pitching hand on a hard line drive hit right to his abdomen, squeezing the ball between his body and the glove, and despite obvious pain, he had the presence of mind to turn around and throw the ball to second base to double off the runner. 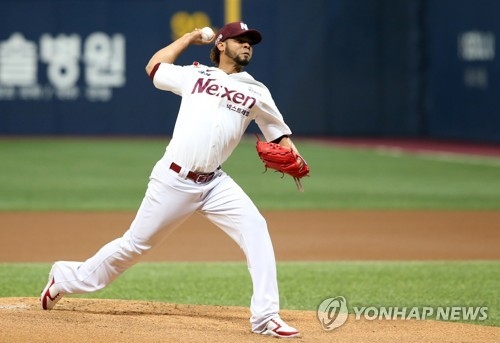 He immediately called for a trainer from the dugout and took himself out of the game. Rogers was later diagnosed with a broken ring finger and some ligament damage.

Rogers will likely miss the rest of the first half. He was the Opening Day starter for the Heroes and leads the team with eight quality starts. He has a 5-4 record and a 3.80 ERA and has thrown a team-high 83 innings.

Losing Rogers is the latest blow to what once seemed to be a promising season for the Heroes. They entered the 2018 season confident that they could contend for a league title, after signing Rogers, a former big league hurler with some prior KBO experience, to anchor the rotation and bringing back MVP-winning slugger Park Byung-ho after a short stint with the Minnesota Twins.

But in February, owner Lee Chang-suk was convicted of embezzlement, leaving a leadership void in the front office. On May 23, sexual assault allegations emerged against their starting catcher Park Dong-won and closer Cho Sang-woo. They have been suspended indefinitely by the KBO while undergoing police investigation.

Then last week, the Heroes were found to have made a series of illegal player-for-cash trades over the past decade, and the KBO has formed a special investigative body to look further into the case.

On the field, key players like Park Byung-ho, Seo Geon-chang, Lee Jung-hoo and Kim Ha-seong have all missed time with assorted injuries.

Through Sunday's action, the Heroes were in seventh place among 10 clubs at 28-32.