SEOUL, June 4 (Yonhap) -- Experts on Monday called on the government to come up with a unified system to monitor radioactive bed mattresses after Daijin Bed Co. products were found to release radon that exceeds set safety standards.

"Several government agencies, such as the Nuclear Safety and Security Commission, the Ministry of Environment and the Ministry of Health and Welfare, are all handling policies related to radioactive substances, such as radon," said Cho Seung-yeon, professor at Yonsei University. "It is vital that a single regime is created to keep tabs on such activities."

Radon is a radioactive, colorless and odorless gas that can be found in nature as an indirect decay product of uranium or thorium. It is considered a health hazard due to its radioactivity and exposure to the radioactive gas can cause lung cancer.

The remarks were made during an open debate hosted by the Korea Science Journalists Association, and Reps. Shin Yong-hyeon and Kim Sam-hwa at the National Assembly.

Earlier, the Nuclear Safety and Security Commission announced that some of Daijin's mattresses released radon up to 9.3 times above the national standard.

Cho further voiced the need to come up with the government-led commission to monitor various radioactive materials that ordinary citizens can be exposed to on an everyday basis.

The radon mattress incident has raised concerns that the government failed to properly monitor radiation levels of everyday goods.

"The Nuclear Safety and Security Commission will first focus on collecting problematic mattresses and help consumers, and further push forward in improving the system after discussing with relevant government agencies and hearing opinions from experts and civic groups," said Ko Seo-gon, a commission official.

Daijin Bed apologized for the incident and said it is in the process of recalling the products cited for releasing radon from all stores. The company had earlier shut down all stores it directly operated amid the unfolding scandal.

Despite such actions, groups of consumers have already filed a legal action against the company. 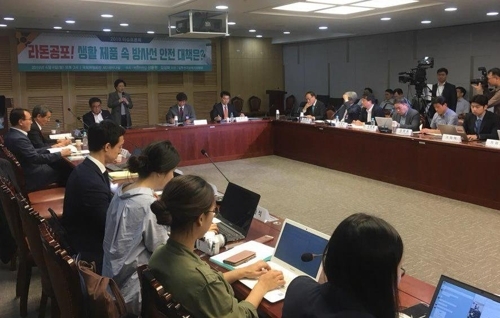